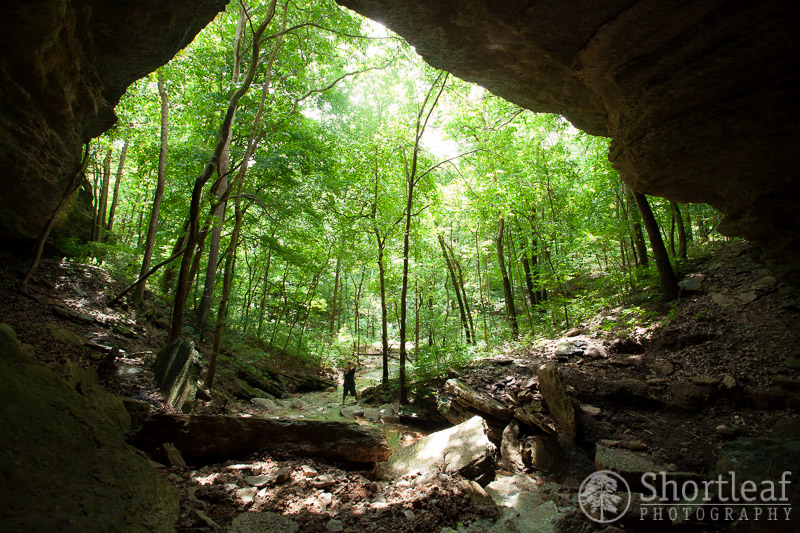 I recently had some family visiting from out of state who wanted to do some “Missouri” things, specifically checking out some caves. Unfortunately, the caves I had arranged for us to explore were flooded.  So I decided to take them to some “off the beaten path” places I had discovered years ago.

The first place I took them is a spot where you pull over on the side of the road and follow what appears to be a long abandoned road, perhaps a relic from the logging boom of the late 1800s when the Ozarks were dominated by old growth pine. The trail eventually disappeared, so using my GPS, we made our way out to a ridge and then began route finding down the steep terrain towards what sounded like a running water. 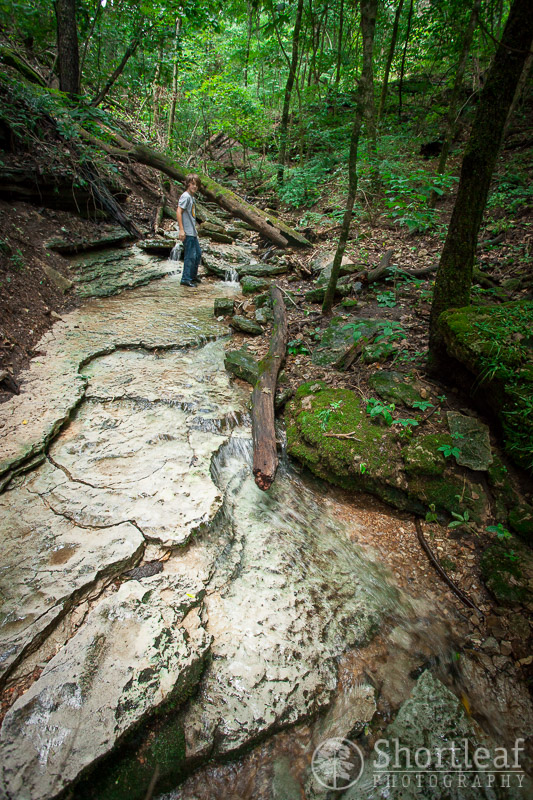 Between the two steep ridges was a beautiful stream, cascading rapidly towards the hollow below us.  We climbed up the rocky stream a little way, curious to see what may be around each turn.  Talon was amazed at how clear the water was, and wanted to drink it, though I recommended against it. I have drank water from many an Ozark stream, though never without filtering or otherwise treating it. 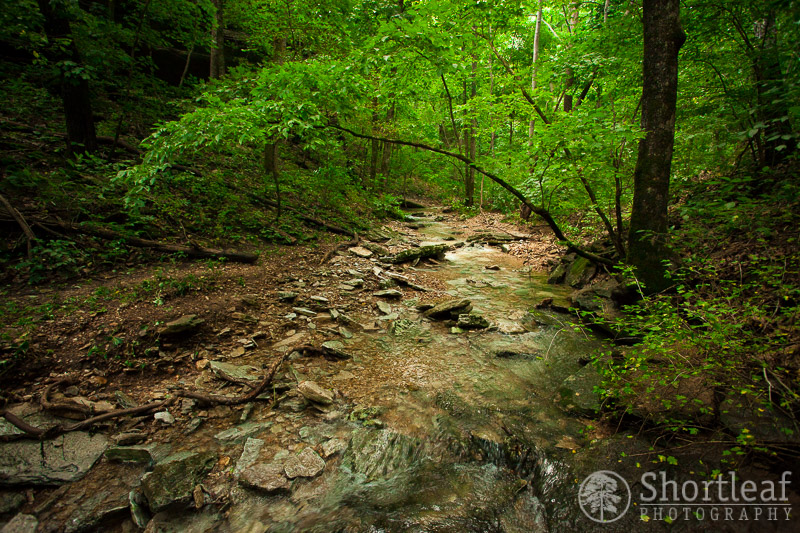 Eventually we decided to turn around and start heading back down toward the bottom of the hollow, where the stream converged with another larger but equally clear stream.  We turned and started walking up the stream that occupied the floor of this narrow and densely covered valley, or hollow as they call them here. Though I once felt it beneficial to always keep my feet dry when hiking, I have since discovered that there are few things more refreshing and relaxing than walking through a cold rushing stream on a hot summer day. 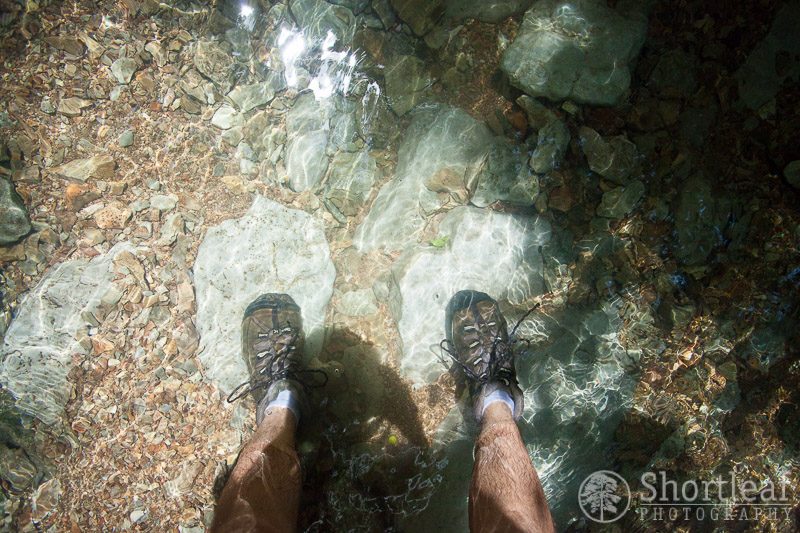 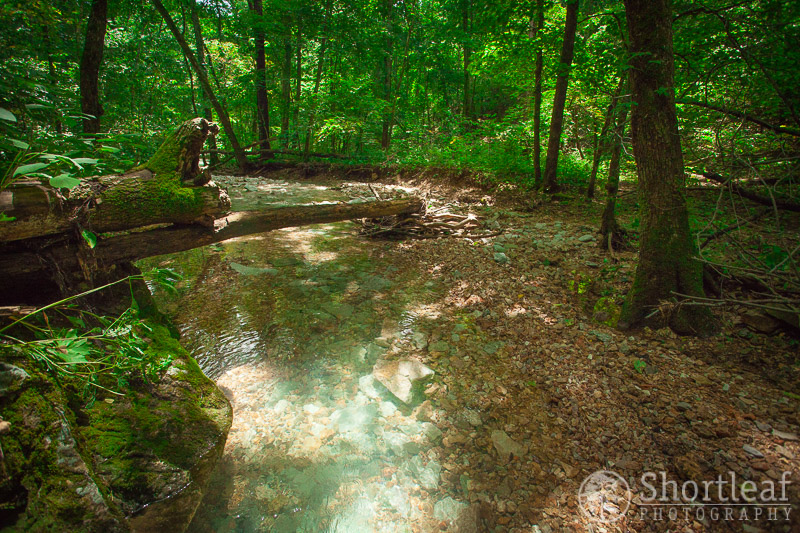 We noticed a particularly large alcove up above us to one side, so we  left the stream and went to explore this massive ledge of limestone that was overhanging the steep hillside.  The overhang was dripping water, enough to get us wet, but not really enough to be considered a waterfall. The vibrant green foliage surrounded by the steep rocky slopes of the hollow, the sparking drops of water dripping from above, and the sound of a mountain stream below reminded me of how much I love these special places God created and how grateful I am to be standing there in that moment to soak it all in. 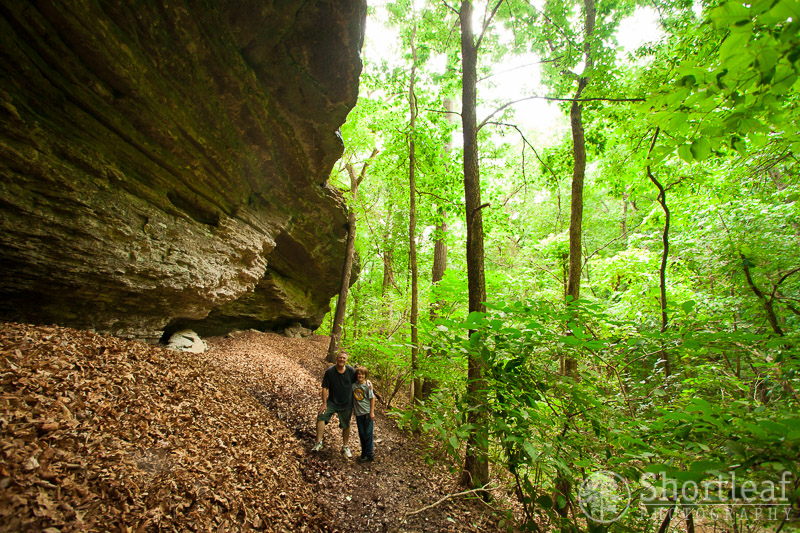 After following the ledge for a ways, we climbed back down to the stream and followed it as it twisted and turned past a series of ripples and pools, each one calling me to jump in. None of them were more than waist deep, but that was enough to stay cool and refreshed. 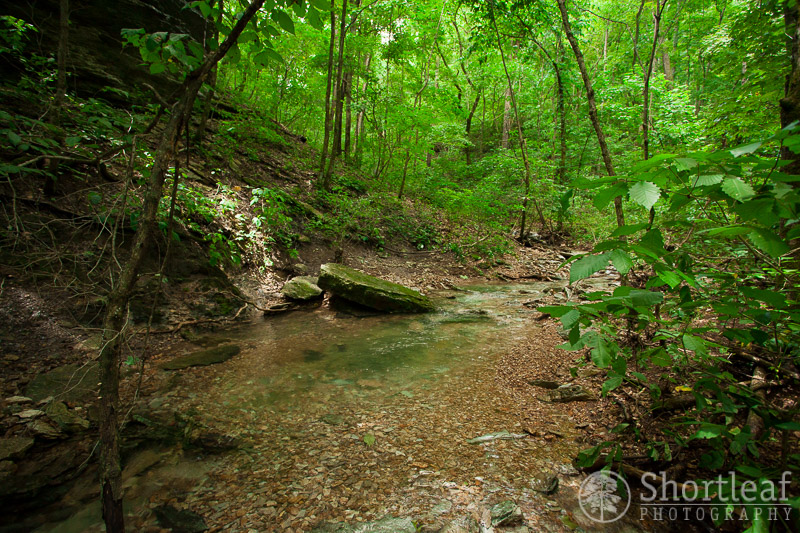 I convinced my cousin and my uncle that wading through the stream was much more enjoyable that attempting to hop from rock to rock or pushing through brush alongside it. 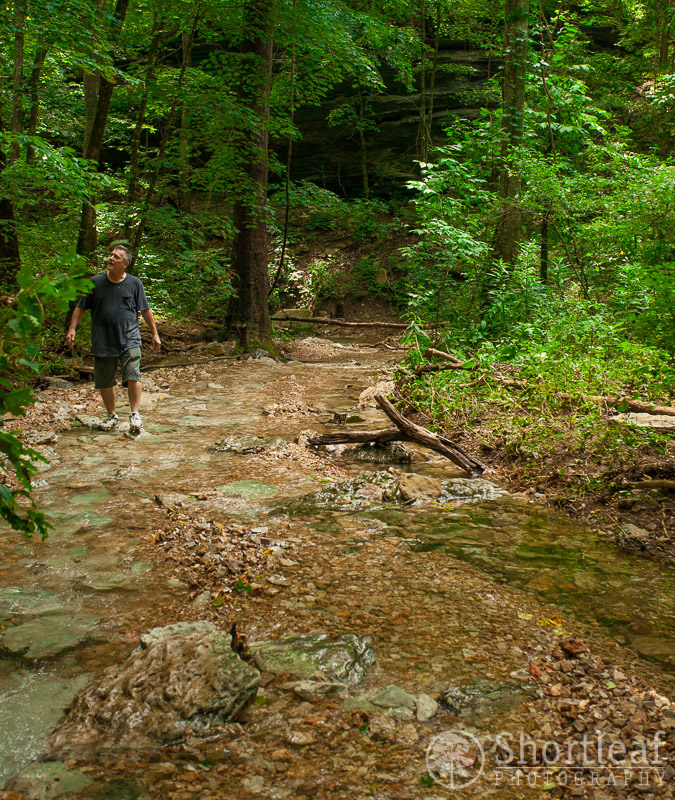 Eventually a dark shadowy area appeared as a backdrop to our stream, signaling that we had arrived at our destination.  A large ominous black opening in the hill was before us, out which poured cool air and even cooler water. It’s an amazing sight and Talon was eager to explore it’s depths so we started climbing up and in. 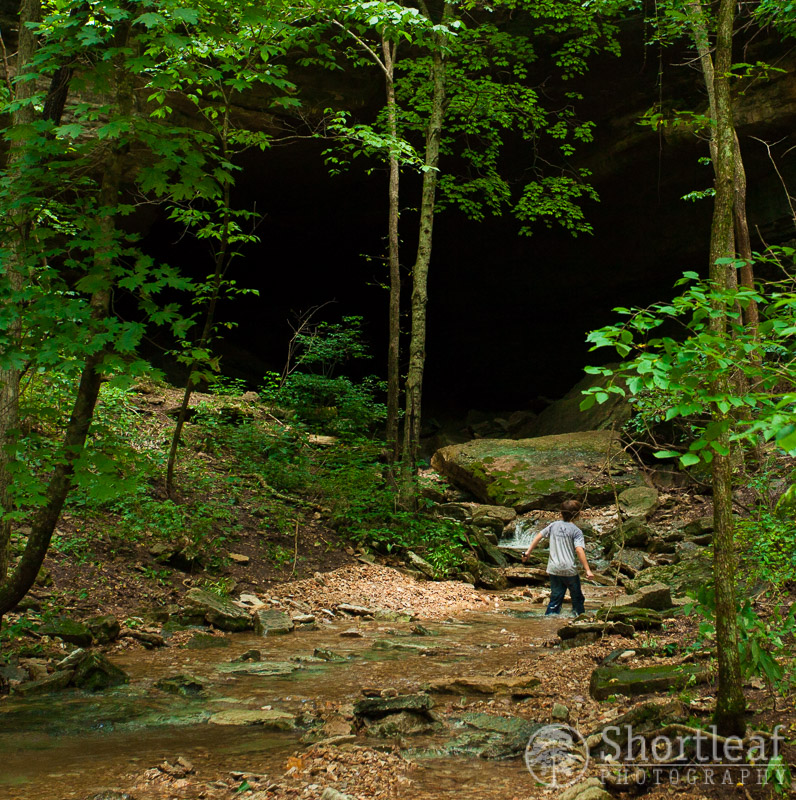 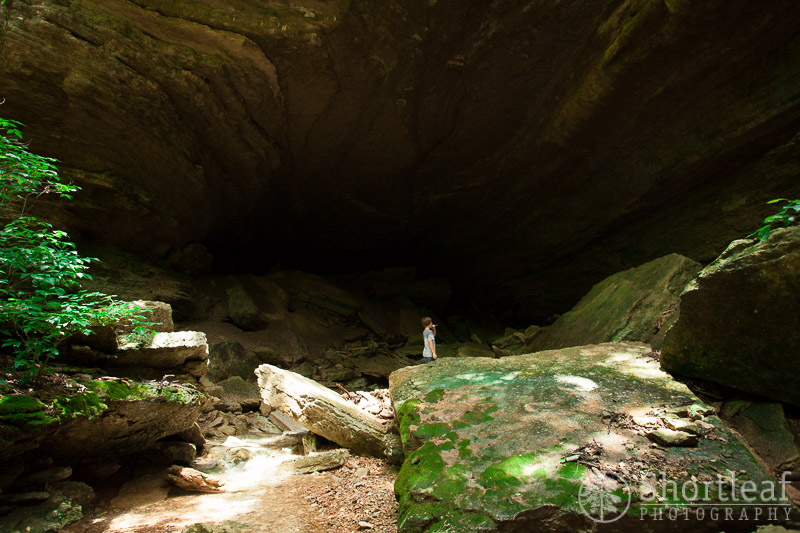 Inside are a few small side caves, a small waterfall that I believed to be coming from an underground spring, and if you follow the other source of water, it leads to a smaller opening on the top of the ledge where a small tributary was contributing the little water it had. 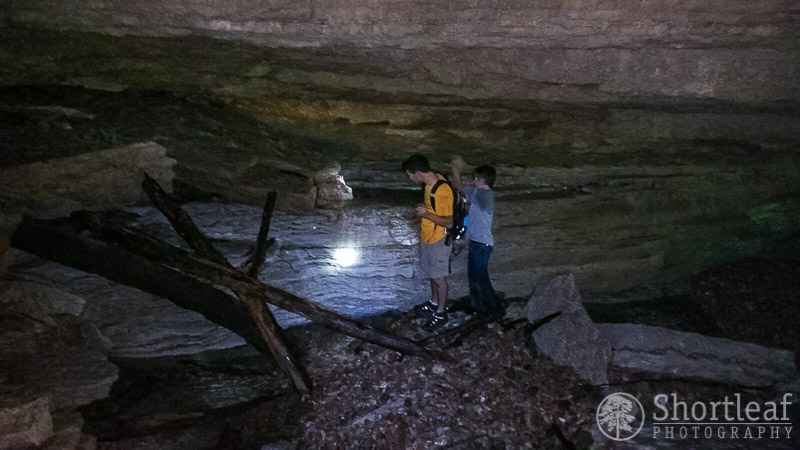 We were hungry and our lunch was back at the truck so we started hiking back out, but not before I showered my head in one of the small waterfalls inside the cave. This is one of the few things more refreshing than wading a cold stream on a hot day, perhaps only outdone by jumping into a 56 degree ozark spring, such as the one on the North Fork. We started the long hike out of the hollow, quickly realizing we had been enjoying a micro-climate that was noticeably cooler than the hot weather that had blanketed the Ozarks that afternoon. 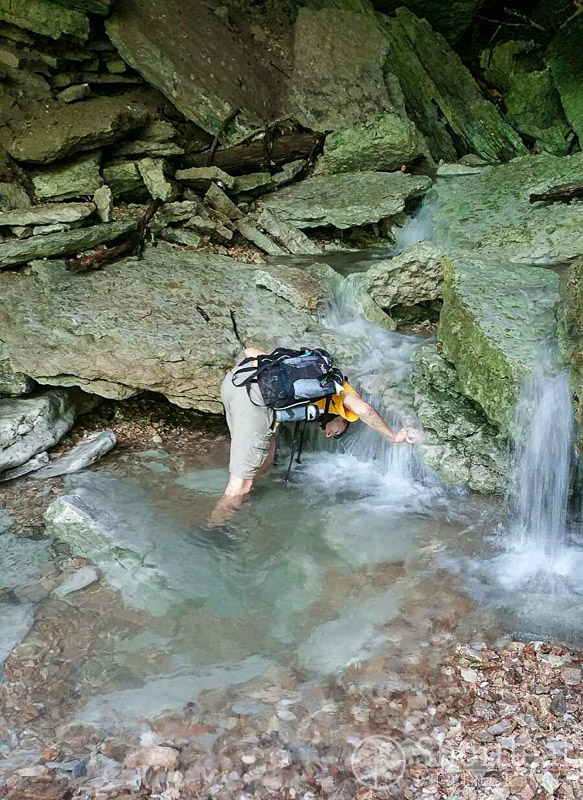 After climbing up a different ridge, passing a nice stand of large, sweet scented pines, and eventually connecting a loop trail, we found ourselves within sight of the truck having enjoyed a spectacular glimpse into the Ozarks wilderness. It was a great outing, and left me wondering why I often go through such efforts to travel to far away places when there are so many corners of the Ozarks I have yet to explore. 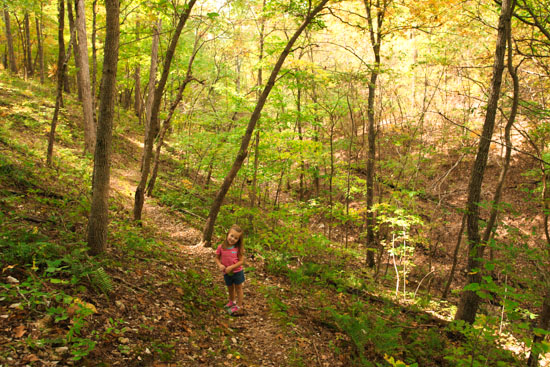 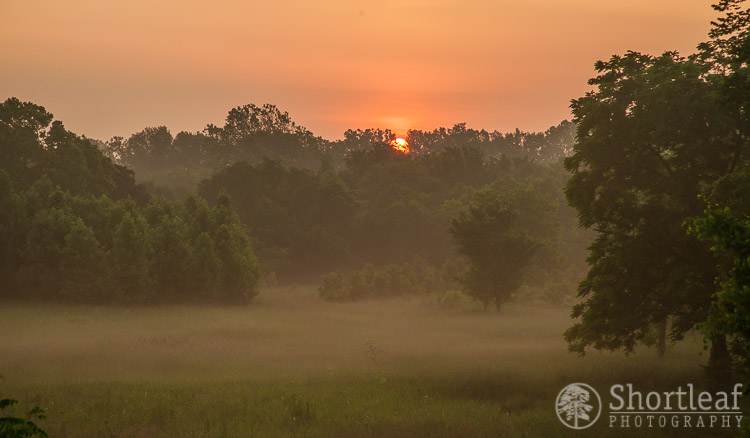