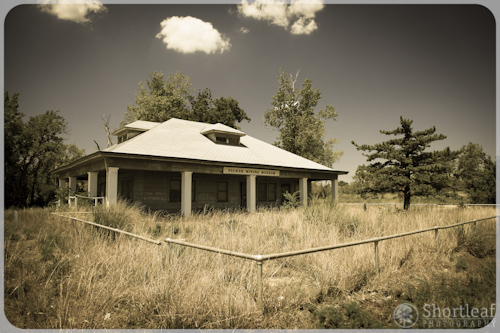 The town of Picher, Oklahoma has interested me for awhile. It’s a small town not far from here that was totally surrounded by mining waste. Eventually the EPA implemented a buyout of the entire town after determining it to be so contaminated that it was uninhabitable.

Just as the forced exodus was beginning, a tornado ripped through the town, destroying what little was left, and today there are only a few remaining structures. Mostly those with some sort of historical value. It has many of the qualities of any other ghost town. Eerie empty streets, buildings that have been abandoned and taken over by the elements. But of course Picher was a thriving (in a very loose sense) town just 10 years ago.

Allegedly there are still a small handful of inhabitants that refuse to leave, believing the town is not contaminated and the buyout is just an attempt by the government to steal their land. It doesn’t take a genius to look around and see the mountains of mine waste and bright orange and red colored stream to see that the area is in fact contaminated.

Anyways, the photo is the remains of a mining museum, which was located in the original office of the mining operations. Both the cause of the towns birth and eventual death. I’m glad I finally had the opportunity to see this interesting and fairly sad piece of local history.