Here is a pastel drawing I have been working on lately that is inspired from a photo I found on the internet. Initially I thought it would be an easy slam dunk, but it’s turned out to be quite difficult and frustrating. I first made a 16×20 oil painting of the image (which looks almost exactly like this pastel version), and after being disappointed with the results I decided to try it with pastel.

At first I thought it was the trees that were wrong, but the more I study it, I think it’s the cold, dark, almost black background with the stark white aspen trees placed in front. It’s so much contrast it looks unnatural.

The spruce trees were challenging as well, but I am fairly happy with them, much happier than with the ones in the oil painting. In the oil painting, they look more like northern white cedar than blue spruce, but I suppose you would have to be a tree geek like me to notice!

So overall I feel like I learned a few things and even though it’s not my favorite, at least I feel a sense of accomplishment with getting to add another piece to my portfolio! 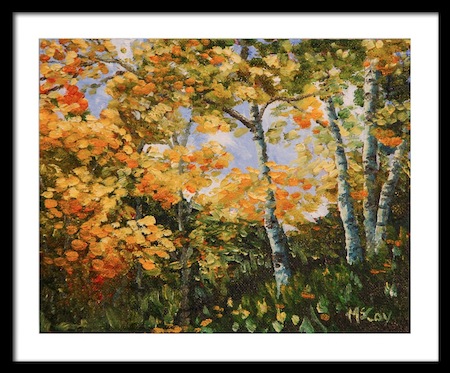