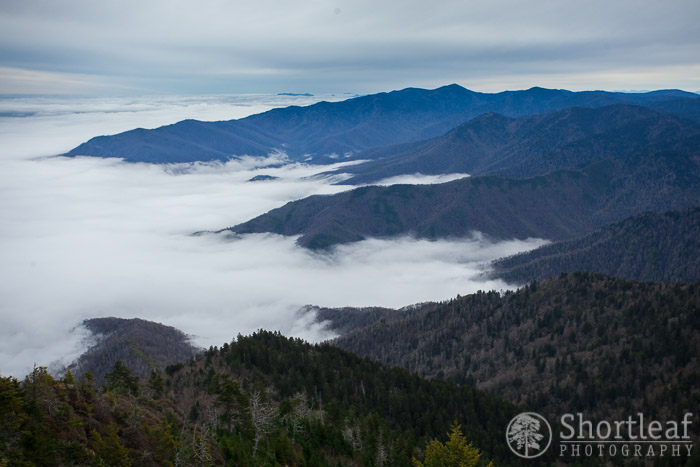 One of my goals for our trip to the Smokies was to find some time and climb a mountain.  It’s been several years since I have had the satisfaction of summiting a noteworthy peak, so I was feeling long overdue for such a thing.  After researching various options and weighing numerous factors such as proximity to where we were staying, length of hike, views and sights along the trail, I finally decided on Mt. Leconte.  There are many different ways to reach the summit of this peak, but I chose the Alum Cave trail (which does not actually feature any caves).

The trail was long (almost 13 miles round trip) and steep, with a total of 3,400′ of elevation gain. 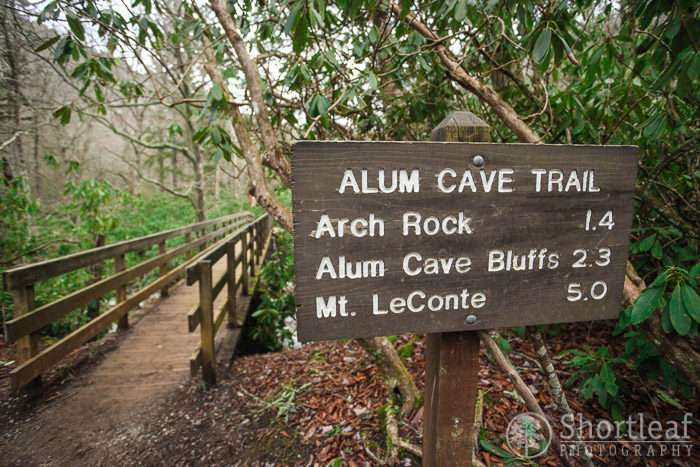 This sign was a little misleading because Mt. Leconte has 4 peaks along it’s summit, and the one I was headed to was a full mile beyond the point where this mileage was taken from. 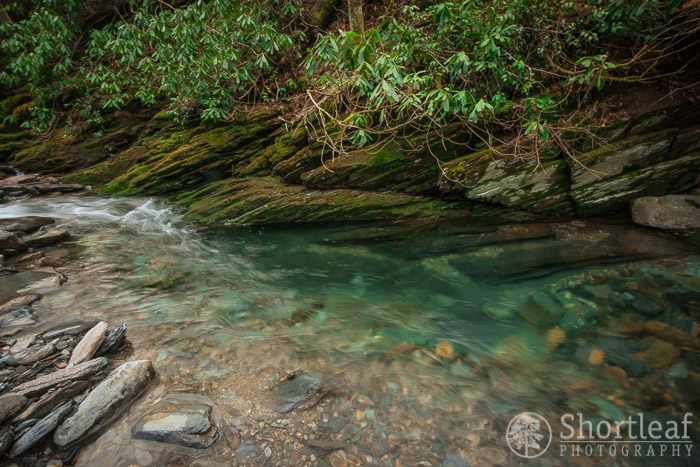 The first mile or so of the Alum Cave trail climbed uphill along a small stream.  I am a sucker for clear blue pools of water in streams so I walked around this spot for entirely too long trying to find it’s best angle.  As usual, when I later started sorting my photos, the best one was the first one. 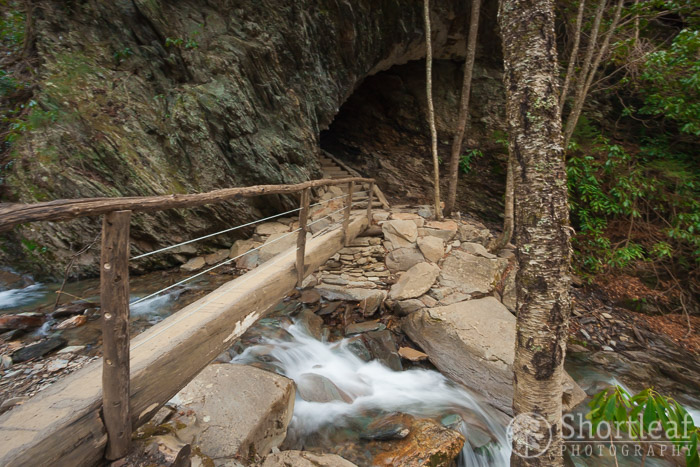 This was a neat point where the trail crossed the stream and climbed a set of stairs that went up through a steep cave like feature at the base of the mountain.  This spot vaguely reminded me of the place I hiked this past summer in the Ozarks. 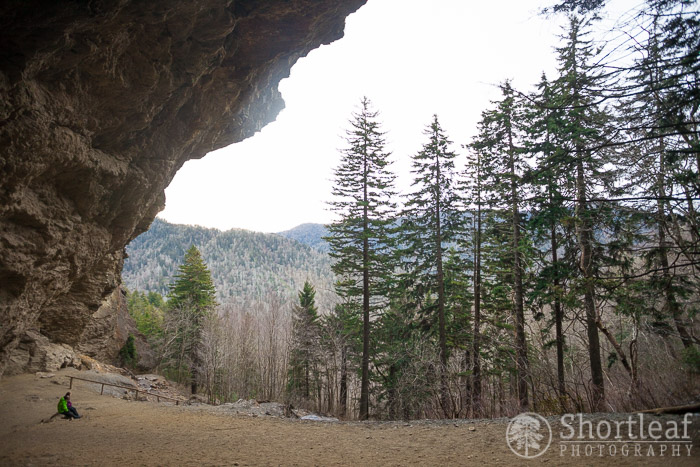 After about 2.5 miles I reached Alum Cave – which is not a cave, but still a cool spot.  It’s a very tall overhang, or alcove and in other times of the year is probably swarming with hikers.  On New Years Day it was just me and this other couple.  It was one of those rare times when I deliberately framed a stranger in my shot because it gives some sense of scale to the scene. 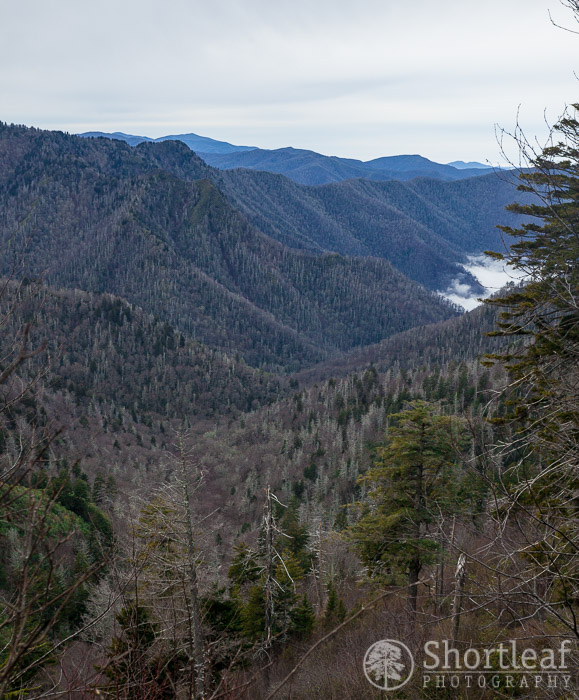 The trail follows along the side of Peregrine Peak, though it doesn’t quite cross the summit.  Still, there were some really beautiful views from the trail, especially with most of the foliage down for the winter. 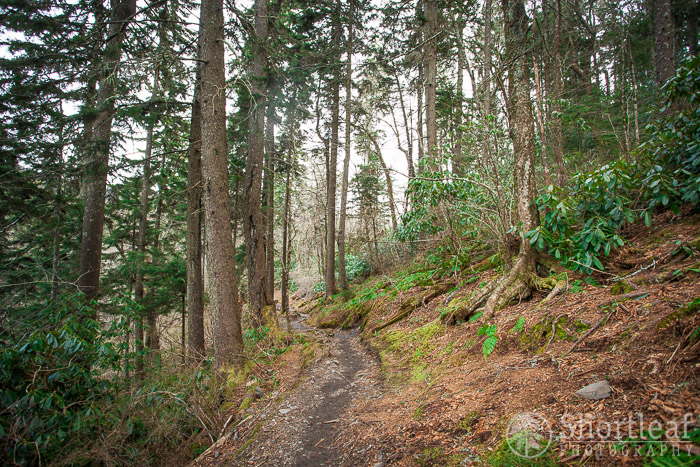 Most of the trail beyond Alum Cave looked a lot like this, with occasional views and some places with narrow ledges and steep drop offs. 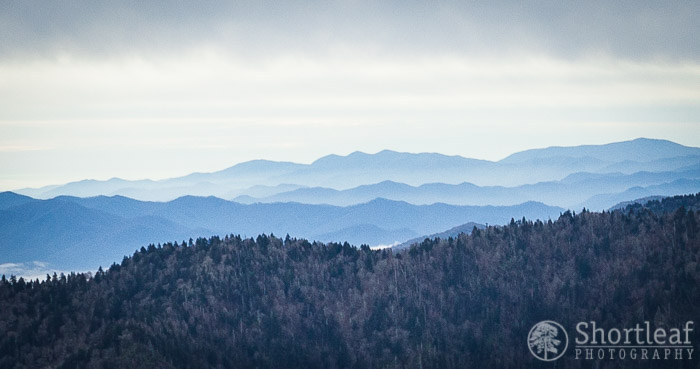 Here was a beautiful view looking down in the vicinity of Newfound Gap, which the day before had seemed really high.  Now looking down on that area, it didn’t look very high anymore.  The view into North Carolina looked like the “smoky” mountains I always pictured in my mind. 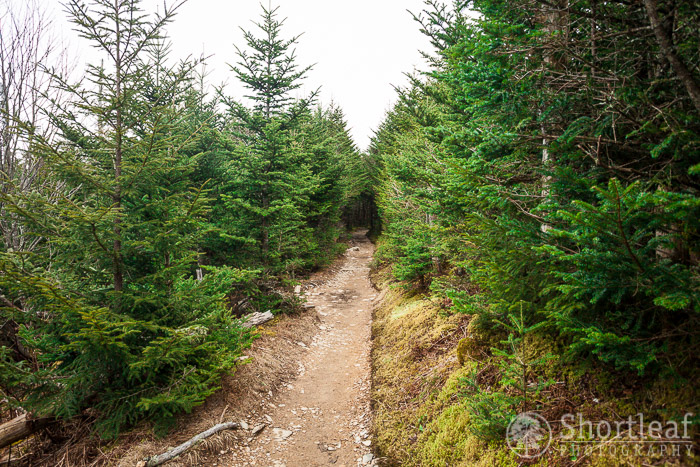 Once on the summit of Leconte, there really weren’t many views to be had.  It was covered with a dense forest of Frasier Fir trees.  Though I was looking forward to some expansive vistas, the smell and beauty of a Fir forest is quite splendid.  I actually think Fir trees smell the best of any conifer.  If you don’t believe me, next time you are int he mountains, pick a few needles and crush them between your fingers. It is the best smell you will ever find.  But first make sure you learn to distinguish between a Fir and a Spruce.  And if you are doing this experiment out west, be aware that a Douglas Fir is not actually a Fir. 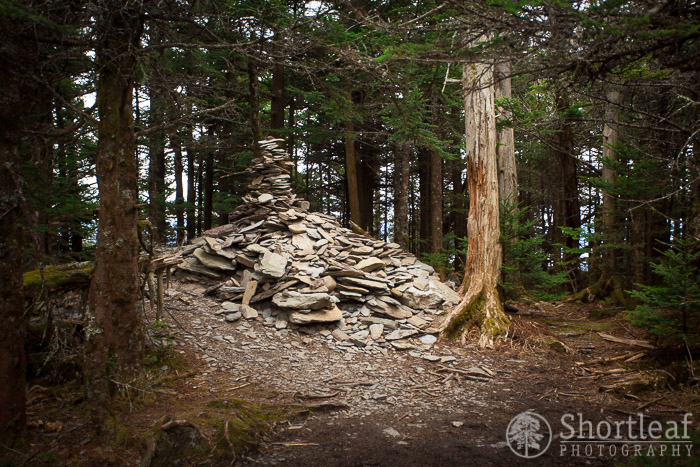 Here is “High Point”, one of four peaks along the summit of Leconte, and as you may guess, it’s the highest point of the mountain.  But aside from the pile of rocks, it was not a particularly interesting spot. 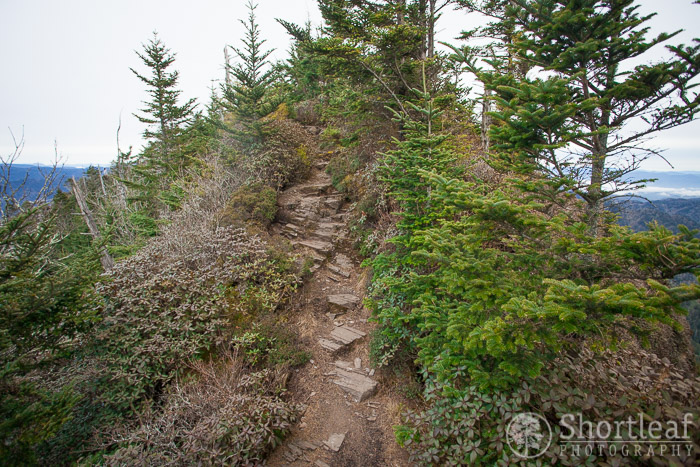 Another half a mile or so past High Point is where the trail started getting super awesome.  This narrow walkway leads out to Myrtle Point, which offered the most incredibly view I had seen in my entire visit to the Smokies.  It was about 300′ lower than High Point but was truly spectacular.  Plus the trail getting out to the point followed this narrow ridge with fairly steep drop offs on BOTH sides.  My favorite.

Looking from Myrtle Point, I could see the clouds below as well as the other higher parts of the Smokies, and even some distant ridges and peaks further west in to Tennessee.  The point offered views similar to this in nearly every direction and it really was impossible to capture it with a photo so I didn’t even try.  I just sat on a rock, at lunch, and soaked it all in. 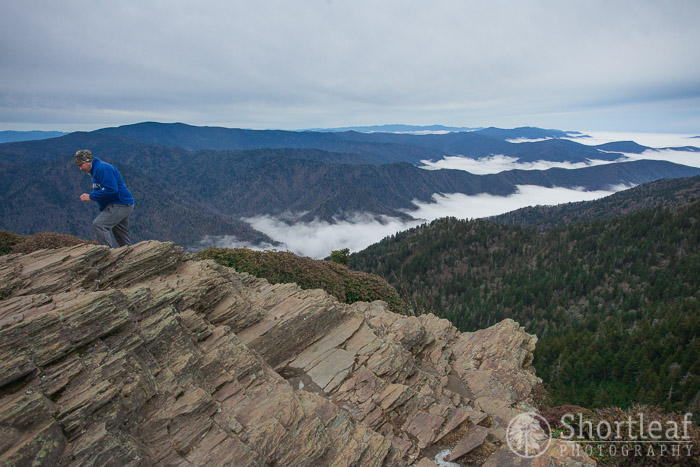 After leaving Myrtle Point, I followed a sign pointing to “Cliff Tops”, which lead as you might guess to the tops of some really tall cliffs.  The views from here were equally as inspiring as Myrtle Point though without the cool sky path to get out there. 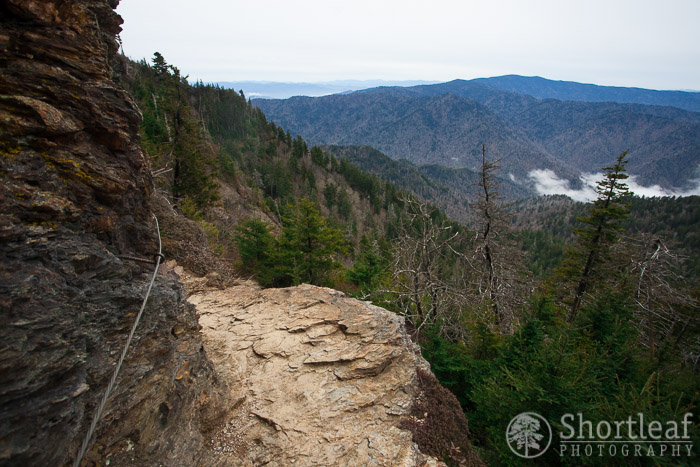 I aways try and take photos of dangerous or precarious parts of trails so I can scare my mom.  So here is a place where the trail consisted of a narrow rock ledge with a  cable to hold on to.  It really wasn’t that scary, though if there had been ice and no handhold, it would have been. 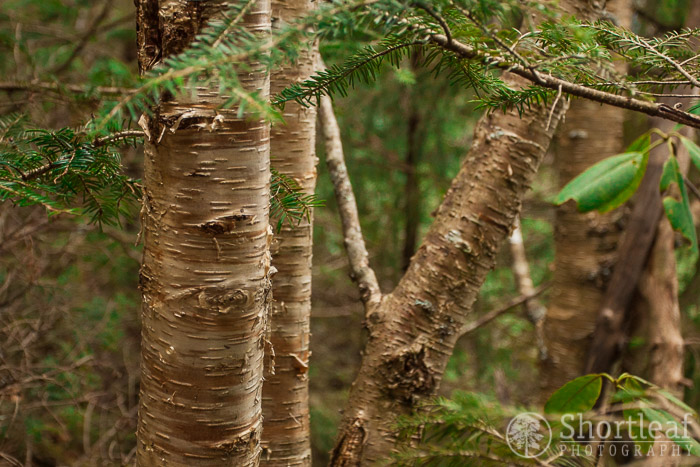 In the higher parts of the mountain I enjoyed the Yellow Birch, a tree species I don’t often see. 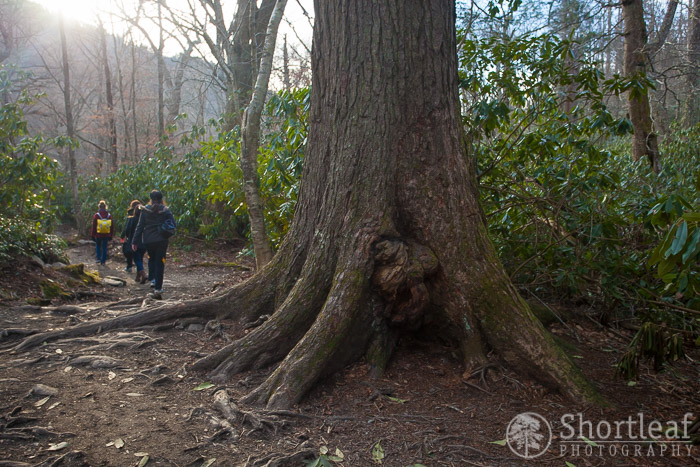 Back down closer to the parking lot there were several huge trees, including this Hemlock.  Again, a case where I was glad to have these people in front of me to add some perspective to the shot.

So all things considered, it was a successful hike and got me ready for my next adventure, whatever it may be! 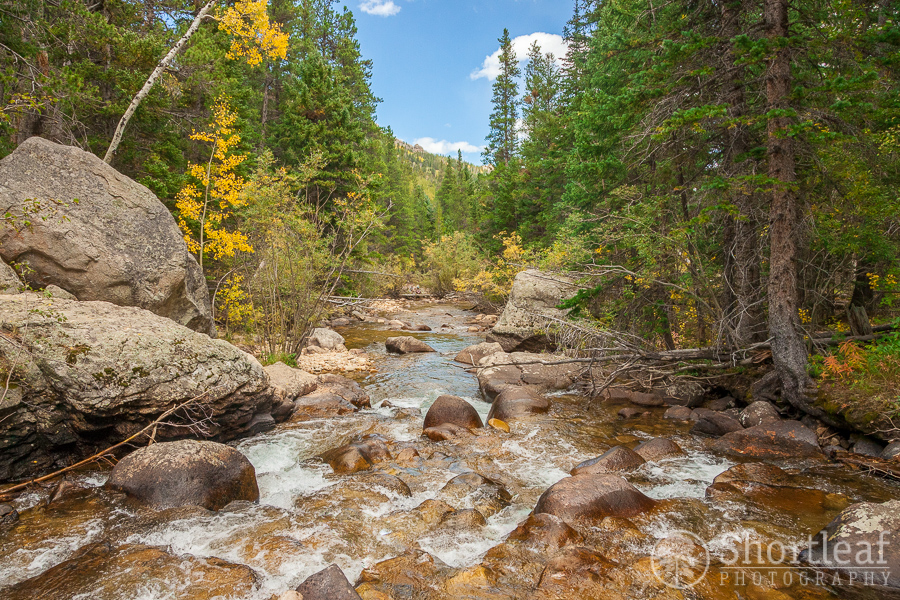