Well July is over, and while technically we are just now in what is historically the hottest stretch of the year, I am optimistic things are trending in a positive direction. So far August has maintained the high temps but it has brought at least one rain shower, which means that even if it doesn’t rain again the rest of the month, we’ll still have more rain than June and July combined.

Here is a graph I made showing the past month of temps compared to average. Of course the ‘average’ doesn’t mean 91 day after day, it means some days around 100, and some days around 80. According to local meteorologist Doug Heady, we typically hit 100 between 0-5 days per year. This July with the ‘cool’ days being in the mid 90s, we managed to average right around 100…HOT HOT HOT! 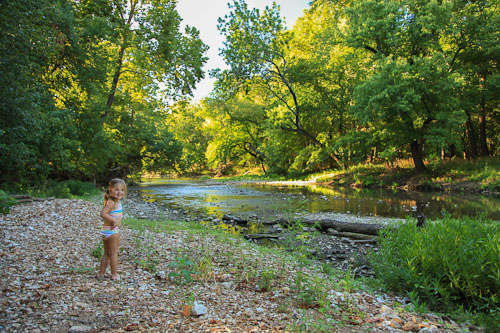 To celebrate the at least temporary break in the 100+ temps, yesterday evening Emma and I went down to the creek to spend some time outside. It was still 96 degrees, but it didn’t feel too bad considering it was more than 10 degrees cooler than a few days ago. I noticed the creek to be at the lowest level I had ever seen it, but it still had water enough to play in and it’s still a magical place to hang out and unwind.

Having only lived here for about 6 years I wondered if this low water was actually exceptional or not, and it turns out that it is. Here is a graph of nearby Spring River from June 1 through today. I would assume this data to be fairly consistent with Center Creek. The flow is currently 30 cubic feet per second, compared to the 30yr average for August of just over 100cfs. The previous recorded low benchmark for August 7, was in 1959 at 43cfs. 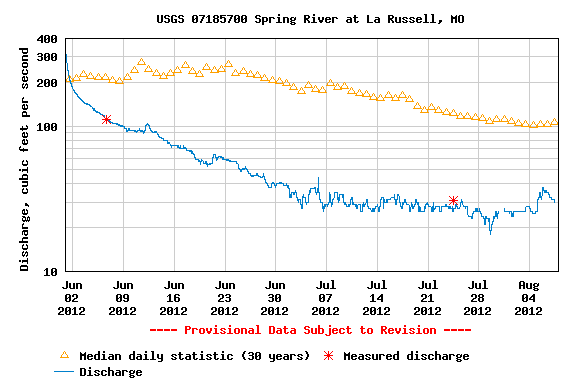 Why I use a UV Filter