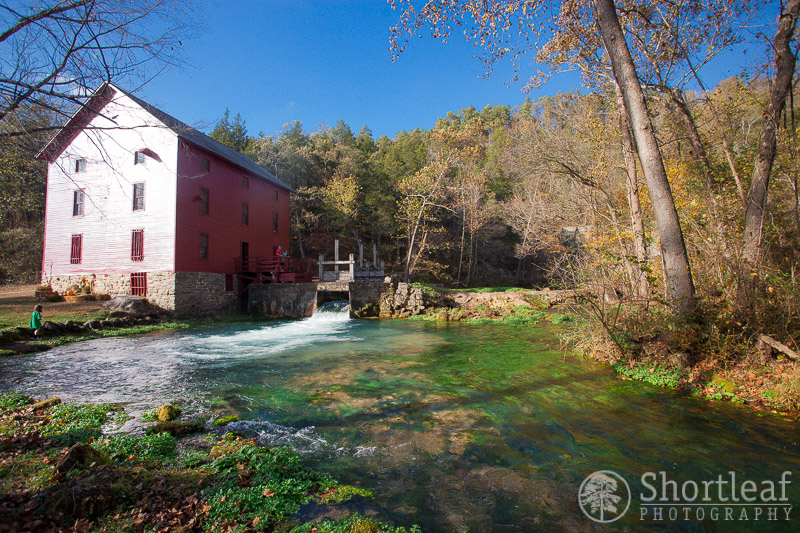 Sometimes I am reminded that Missouri, while not a national mecca for scenery and tourism, is actually quite a playground for those who appreciate nature.  This past weekend was one of those experiences.  We took a mini trip to a new state park called Echo Bluff, which is adjacent to the Ozark National Scenic Riverways.  ONSR is a national park that many people do not realize is a national park in Missouri. The main attraction here is paddling opportunities on the Current River and it’s primary tributary, the Jacks Fork. But there are ample hiking opportunities within the park and other nearby state and federally owned lands as well. It’s an incredibly beautiful area.

What Missouri may lack in beaches and alpine mountain ranges, it makes up for with it’s springs, streams, and smaller scale scenic areas.  Being an avid kayaker, I think Missouri is a fine place to call home considering I could spend a lifetime exploring waterways without ever leaving the state. The density and quality of our waterways is truly exceptional.

So back to my weekend trip.  We started out by visiting Alley Spring Mill, one of those iconic Missouri landmarks that I have always wanted to visit. 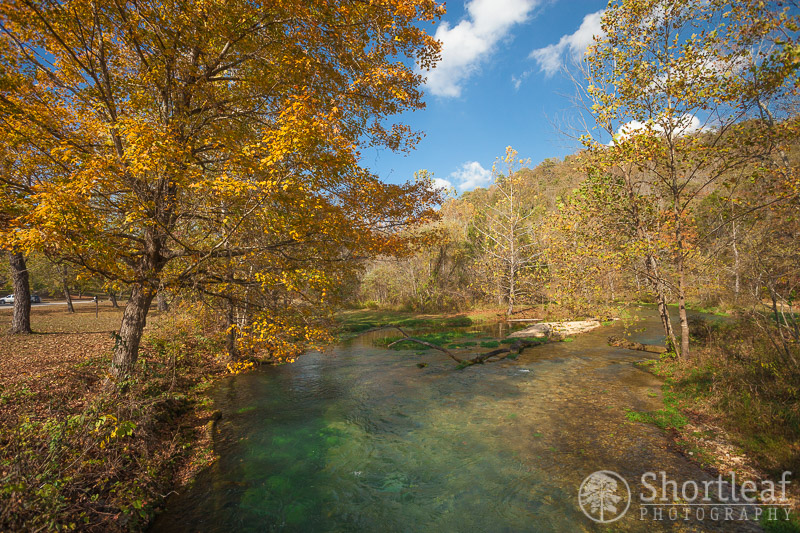 A really great stream swiftly flowing through the park at Alley Mill. 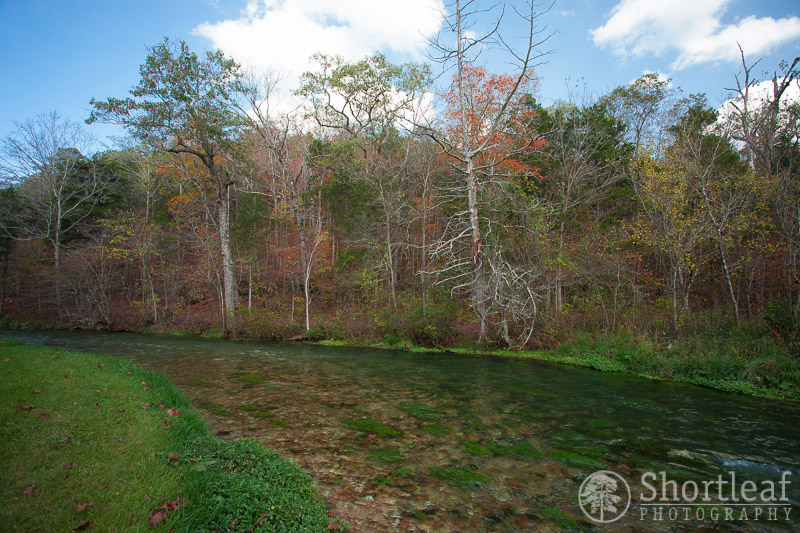 The same stream… this would be such a great streak to kayak, though I am not sure if one is allow to put in at the mill. 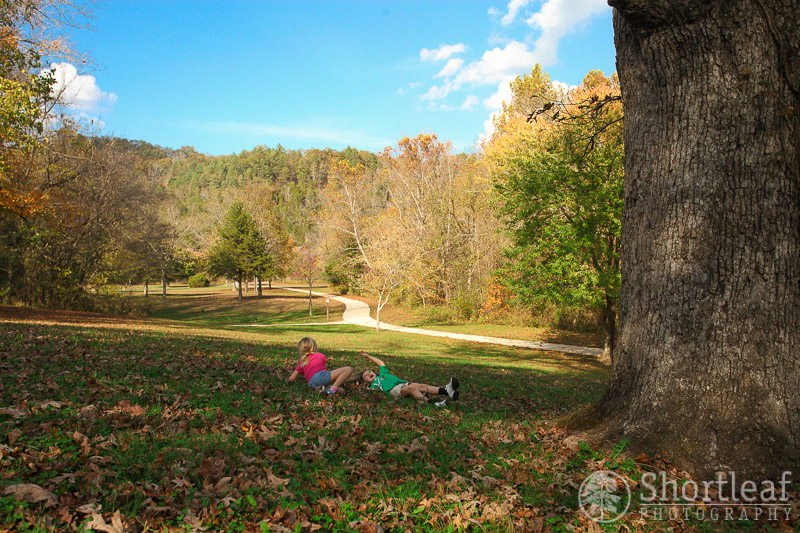 Before we hiked the trail up to the actual mill, the girls enjoyed rolling down the hill to stretch their legs after the 3 1/2 hour drive!

Although I was hoping to get some kind of “postcard” shot of the mill, like so many others have done… the positioning was such that the afternoon sunlight reflects off the side in a really awful way.  The only thing I can figure would be that it would need to be photographed either very early or very late in the day. Or when it’s overcast.  Nevertheless, it’s a neat spot! 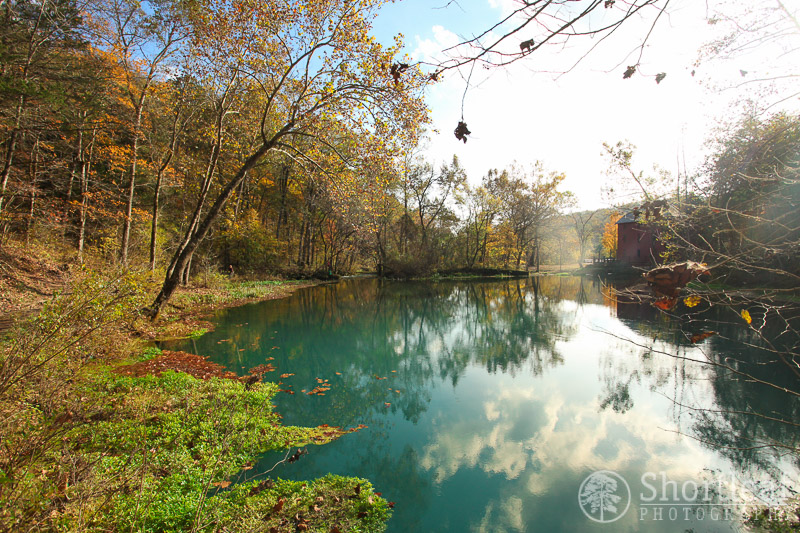 The trail loops around the pool that is impounded by the mill. The spring water makes for some beautiful blue water that is really set off by the colors of the fall foliage. 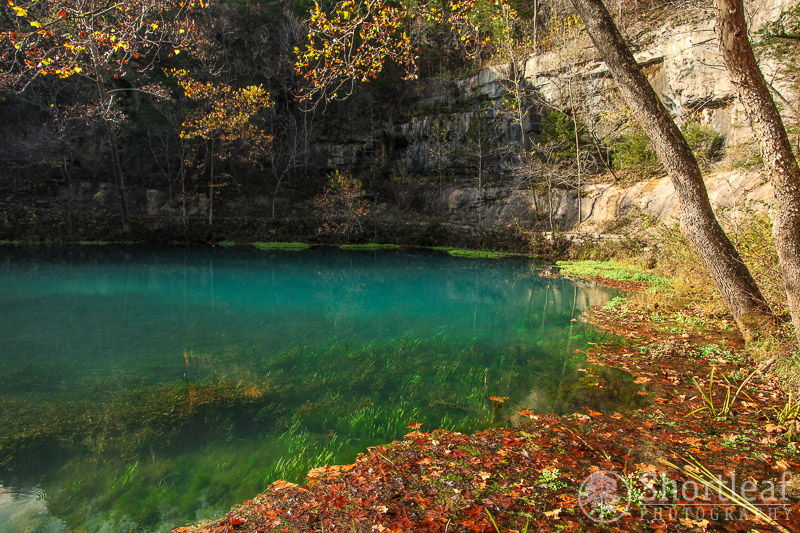 The actual spring – I am not sure how deep this is, but I would imagine at least a few hundred feet.  It reminds me of the spring at Roaring River, which scuba divers have never found the end. 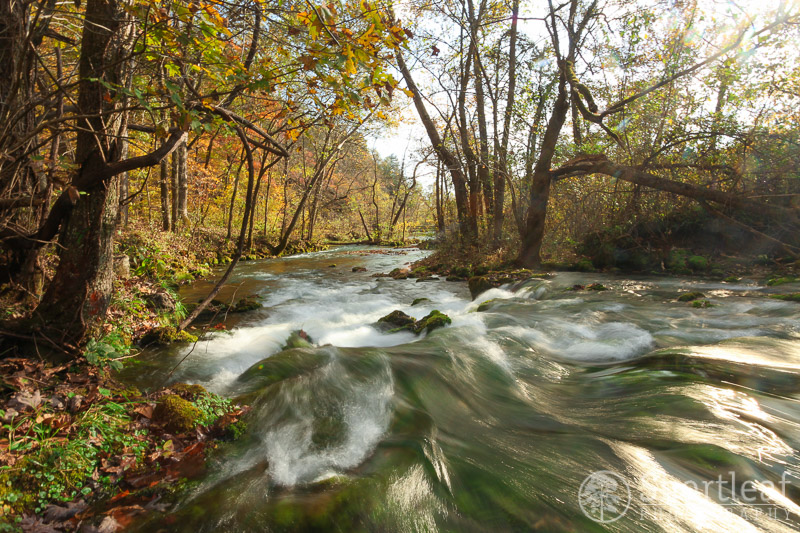 The girls had fun tossing leaves and sticks into this stream and watching them quickly float away. 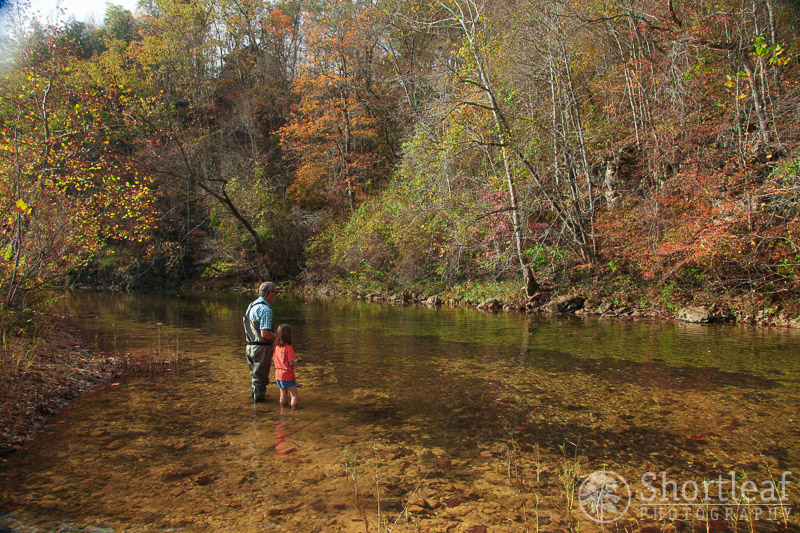 Emma and Eily tried their hand at fishing in this really pretty stream near our cabin.  This is a tributary of the Current River called Sinking Creek.  I was really wishing I would have had my kayak!  Small streams like this are my favorite to float. 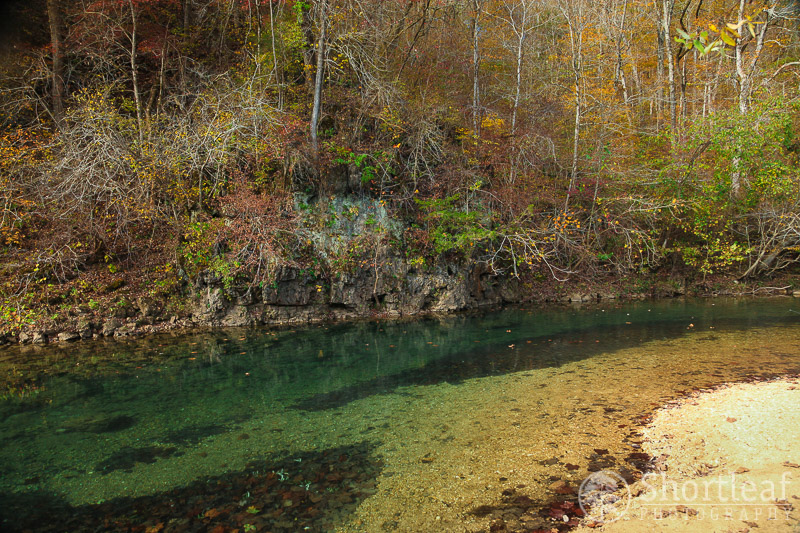 Sinking Creek was so clear and blue that I had to tone down the photos because they looked manipulated. I enjoyed walked along this stream –  and since it was 80 degrees it was nice wading as well! 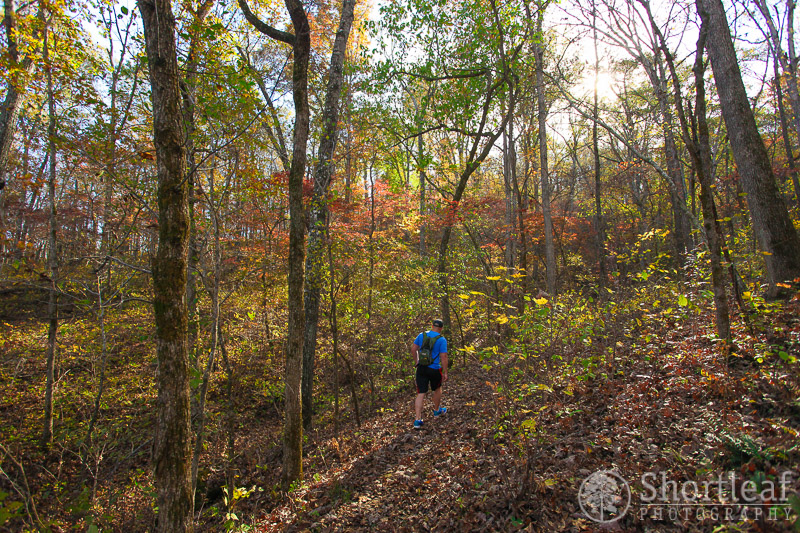 We went on a hike to a feature called “Cave Spring”. I wasn’t sure what exactly to expect, but figured it would be some kind of cave with a spring in it.  The trail there climbed up several high ridges and passed through some beautifully colored forest. Supposedly it’s an Oak/Pine/Hickory forest but what I saw was mostly Oak, Pine, Dogwood, and Maple. The dogwoods and maples really added to the color! 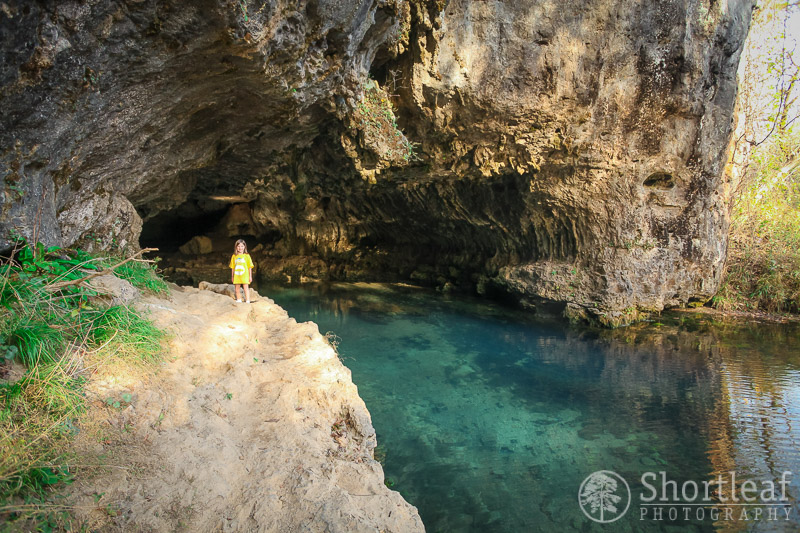 After a few miles the trail descended down a ridge to the bottom of a bluff along the Current River.  The trail lead up to the opening of this cave… seriously how rad is that?!  Emma loves caves so this was right up her alley.  As it turns out, I had floated past this spot in my kayak once before but it was a crowded summer weekend and amidst all the drunk rednecks and cigarette smoke, I didn’t realize the awesomeness of this spot. 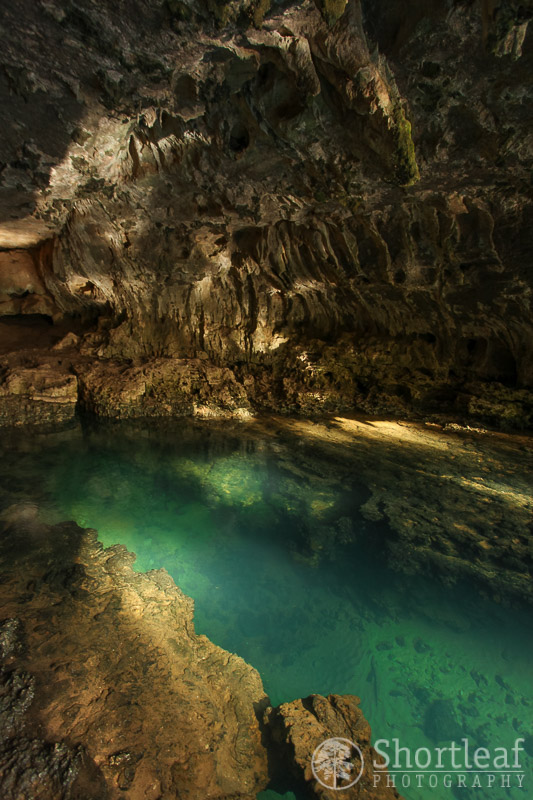 The afternoon sun was just barely shining back into the cave, providing some really awesome natural lighting effects! I am not sure how deep this water is, but it’s pretty deep!  With a kayak, one can easily paddle from the river into the cave and back around the corner where it opens up into a dark, larger room with a giant pool where the water comes up from the ground. Using a flashlight, we could see a lot of fish hanging out in the pool, but couldn’t see the bottom. 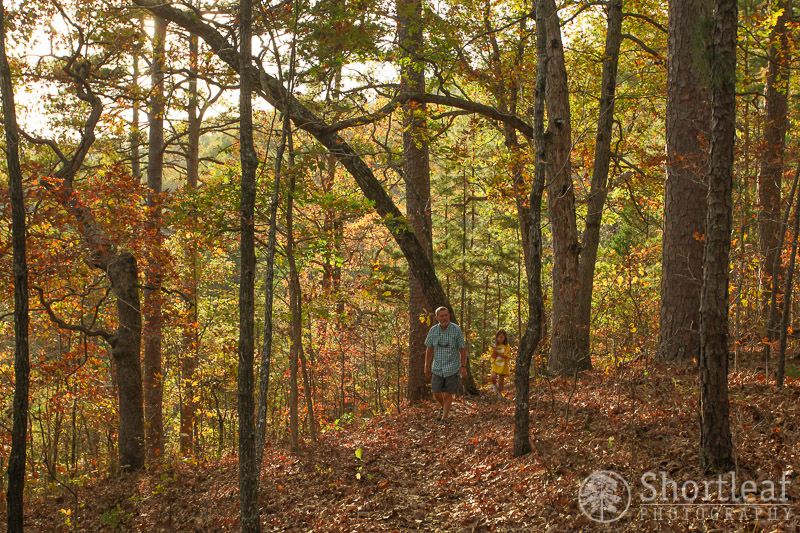 This part of the trail was nice.  Some very large Shortleaf Pine that smelled nice and some colorful oaks.  A little ways down the trail we came upon a great overlook on the top of a tall bluff above the river. 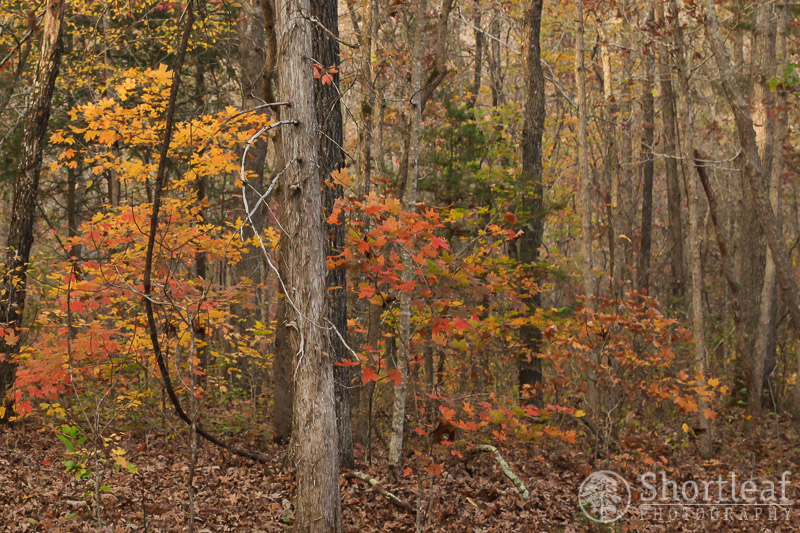 Just some more fall colors as we made our way back down the ridge.

Although it’s nice to take a long journey to other places, sometimes it’s nice to stay close to home and appreciate the things we have right here in the Ozarks!

Lights in the Night 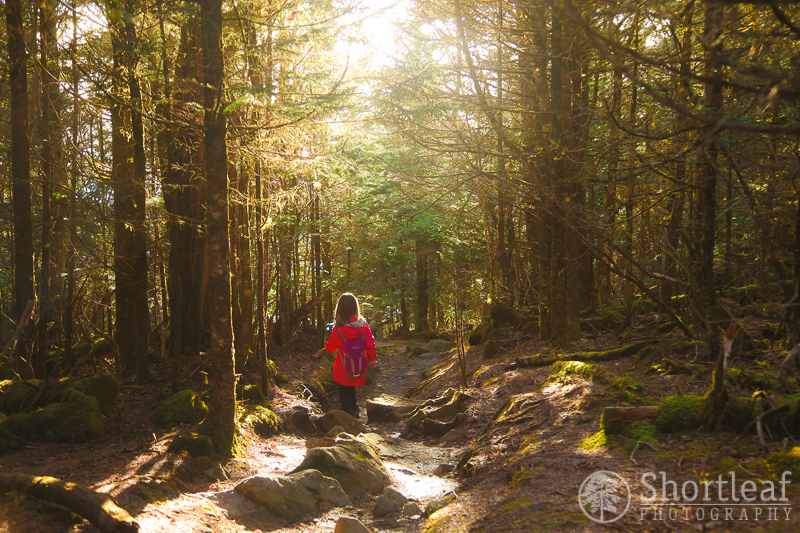