Last week was Ian and I’s bi-annual “man trip”. For the past two years we’ve been researching where to go next, and eventually decided on Coyote Gulch, a relatively small canyon in southeastern Utah. Fortunately my wife is cool with these endeavors of mine! There are a lot of places in Utah with amazing sandstone formations and arches, but what makes Coyote Gulch a particularly magical place is that it has two things that are typically rare in the desert – shade and water.

Coyote Gulch is tucked away down a very long dirt road in one of the most remote areas of the lower 48. There are a few different ways to access and hike the canyon, but we chose the Red Well Trail, which ended up being about 32 miles. One thing to know about Coyote Gulch is that most of the trail is deep, loose sand, which can make for pretty tortuous hiking at times. Many of the features are miles apart and it’s almost a ten mile hike before you even get into the main part of the canyon. So it’s not your typical casual hike, but it’s certainly rewarding for those who undertake it.

Due to space and weight constraints, I only wanted to take 1 lens. I ended up deciding on my 17-40mm, which isn’t as useful as my go-to 24-105, but it turned out to be the perfect lens for this hike! 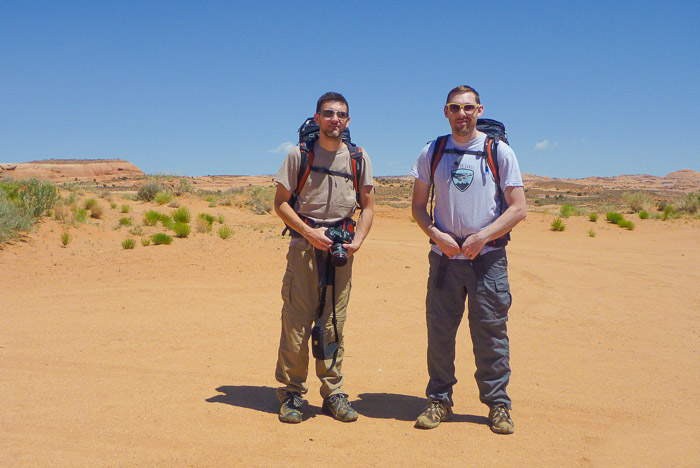 We arrived at the trail just in time for a quick lunch and then we set out! And yes, we have matching backpacks. We found a super good deal on clearance at Cabella’s. 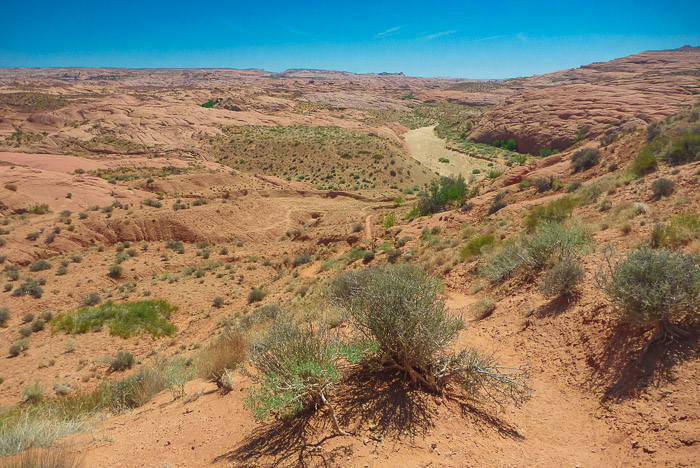 The trail starts as a hike across flat, open desert, eventually descending into this dry wash that gradually transforms into a desert oasis. 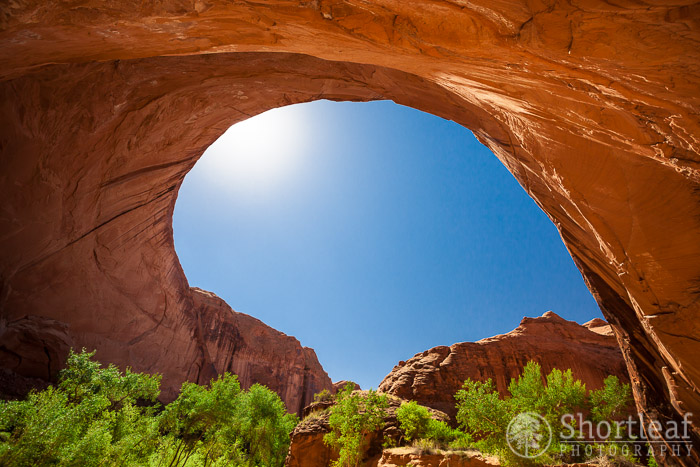 After a few miles, we started encountering formations like this. Photos do a poor job at illustrating the massive scale of the things we saw. The sandstone walls towered hundreds of feet above the full grown cottonwood trees. 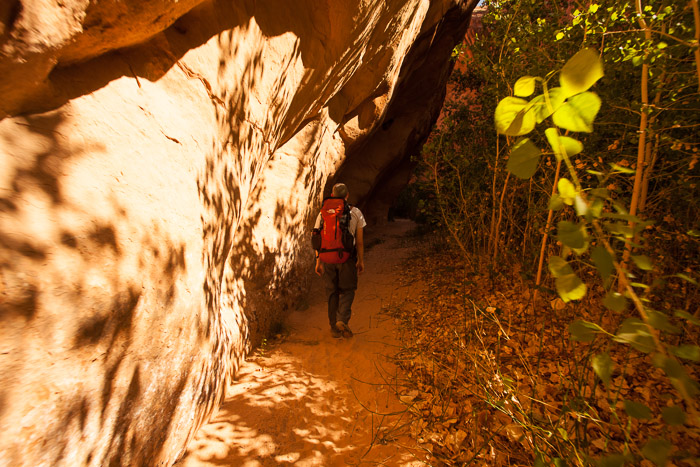 Most of the canyon was fairly wide, but some parts of the trail went through narrow passages. 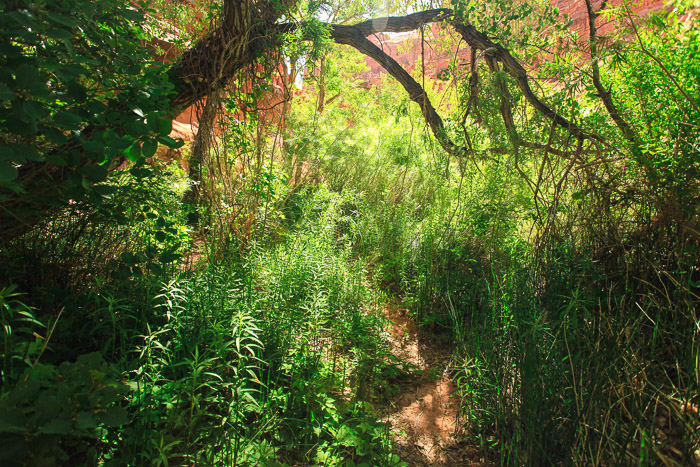 Some parts of the trail went through lush green thickets of willow and other water loving plants that aren’t usually associated with the desert. 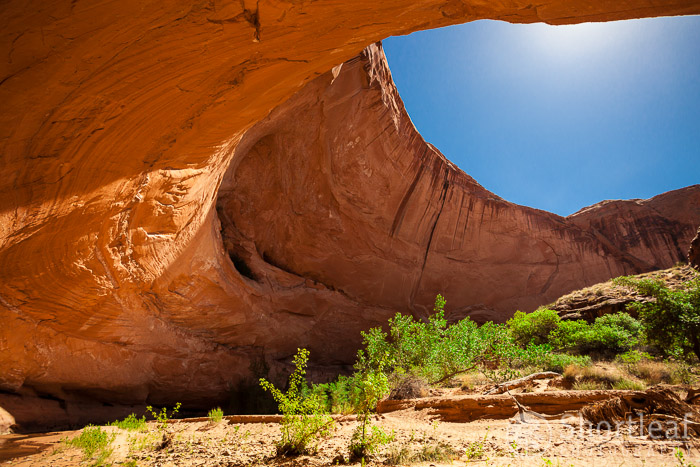 This formation reminded me of a UFO. 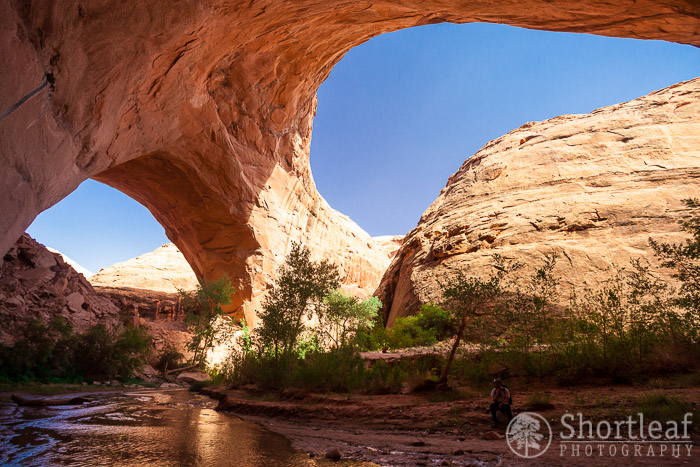 After about 9 miles we encountered the first major landmark of the trail – Jacob Hamblin Arch. Definitely a spectacular sight indeed and well worth the hike! 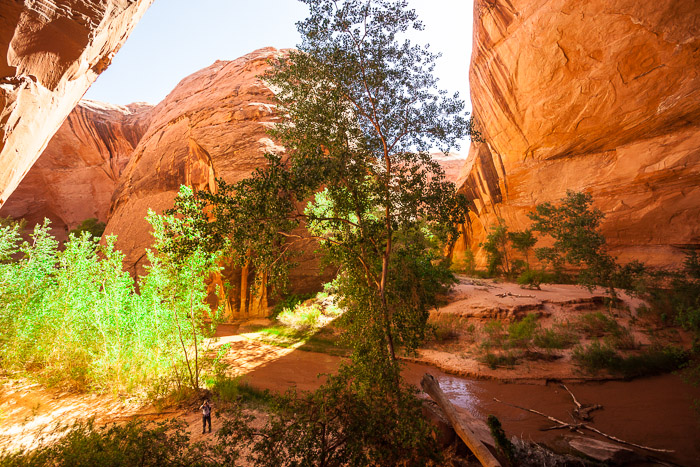 I climbed up to the base of the arch. Note Ian down below, about the size of an ant. 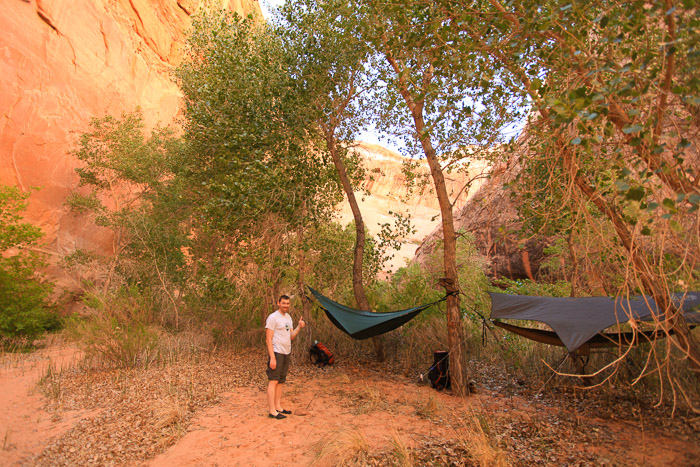 We setup camp about 9.5 miles in. It was a nice spot with walls several hundred feet high on all sides and the sound of rippling water in the background. 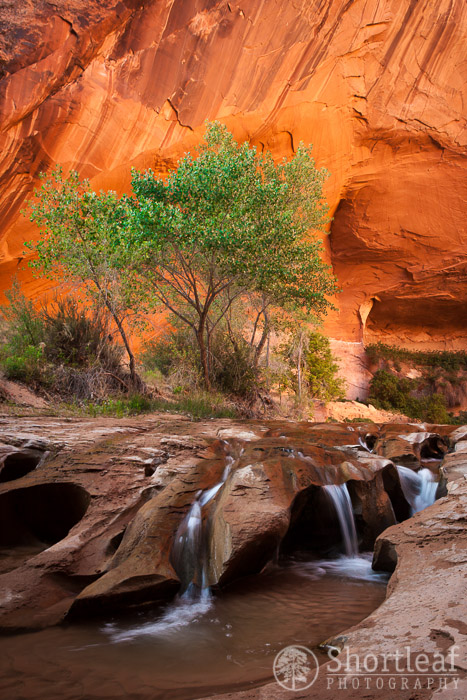 The second day we started down deeper into the canyon where we encountered “Swiss Cheese Falls”. I thought it looked more like water running over a hand.

Due to size and weight limitations I opted to leave the tripod at home. I am somewhat proud of the fact that I am capable of hand holding a shot steady enough for a 1/4 sec exposure! 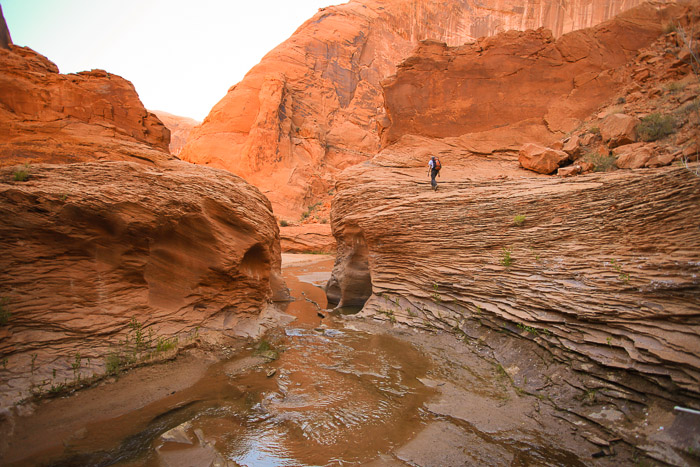 Another narrow spot. I hadn’t yet talked Ian into getting his feet wet, so we hiked up and around this little slot. 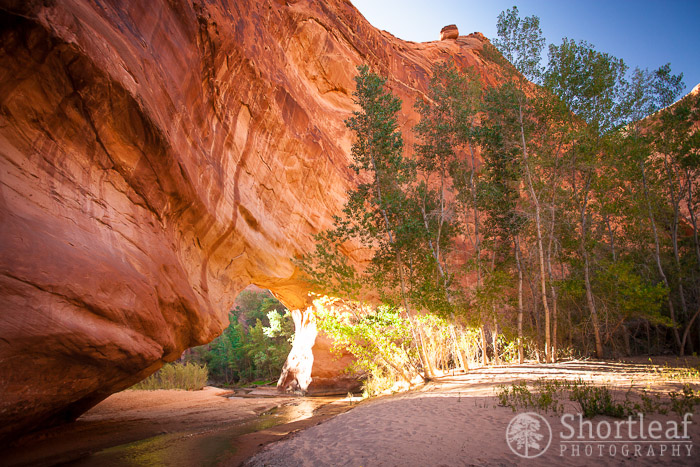 The early morning light shining through this natural bridge. We started our hike about 6:45 so we had plenty of time before it started getting hot. 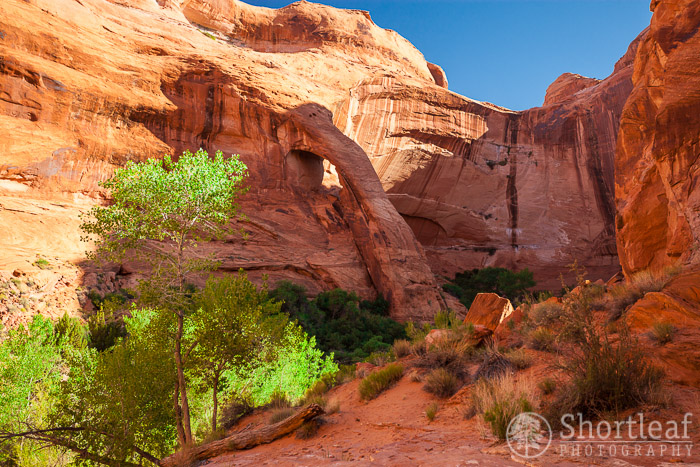 This arch wasn’t as obvious as some, but since it was probably well over 200′ tall on one side it was super cool. 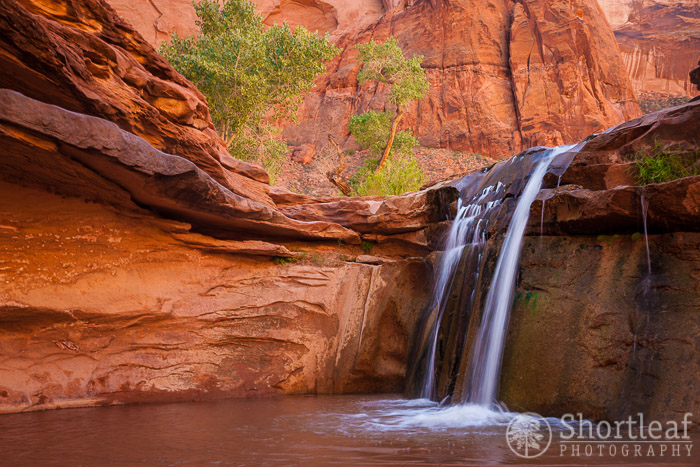 Further down the trail is the ‘waterfall section’, where the elevation begins to drop rapidly towards the confluence with the Escalante River. There were numerous waterfalls along this stretch of trail. 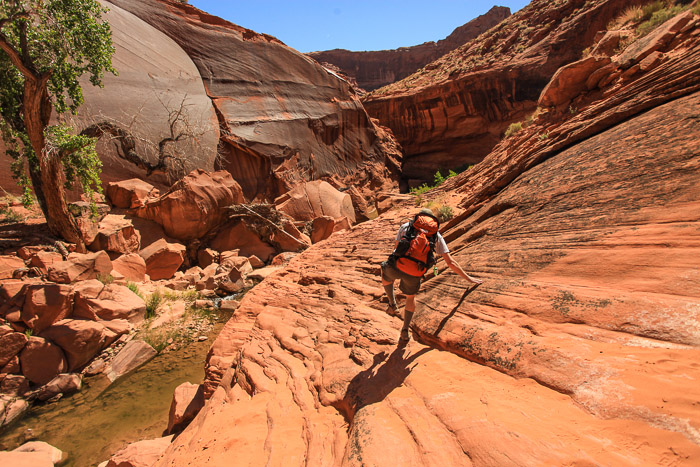 This was a fairly sketchy part of the trail where a massive boulder blocked the stream. To continue down the canyon, you have to climb up and over along a sandstone ledge, part of which has a fairly steep incline sloping down towards a cliff. It was kind of scary. 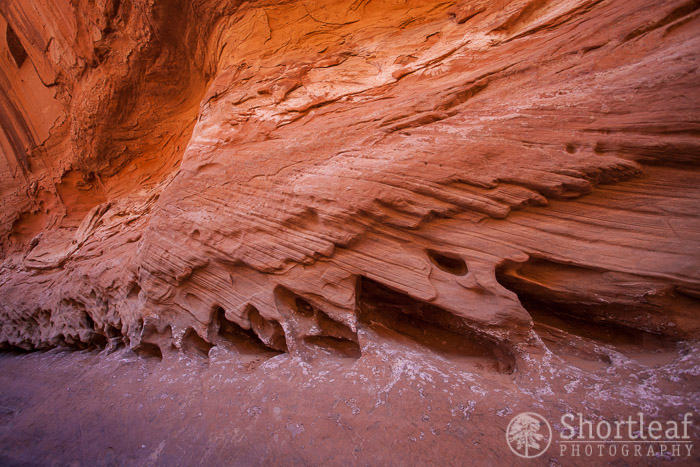 One of many neat patterns in the sandstone walls of the canyon. 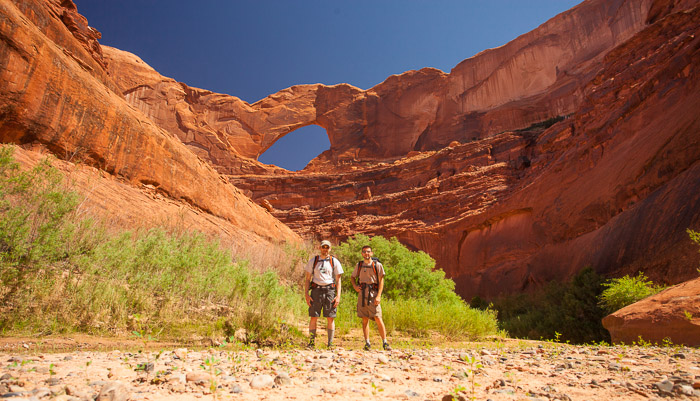 At the end of Coyote Gulch, we hiked up the Escalante River a ways to where we could view Stevens Arch, the 7th largest natural arch in the country. In the photo it doesn’t look excessively large, but it’s still very far away and probably 1,000′ above the river. At this point we turned around and started the hike back up to camp. 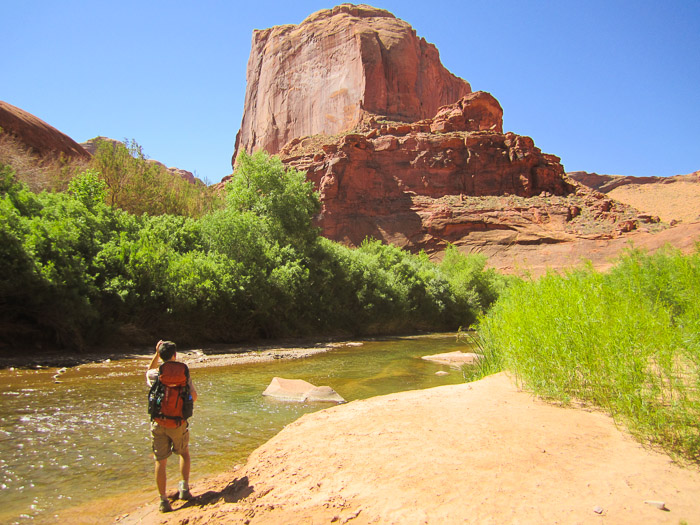 The Escalante River wasn’t very large by Missouri standards, but it’s probably considered a lot of water in the desert. Naturally, I got to wondering if it’s possible to kayak this stream… 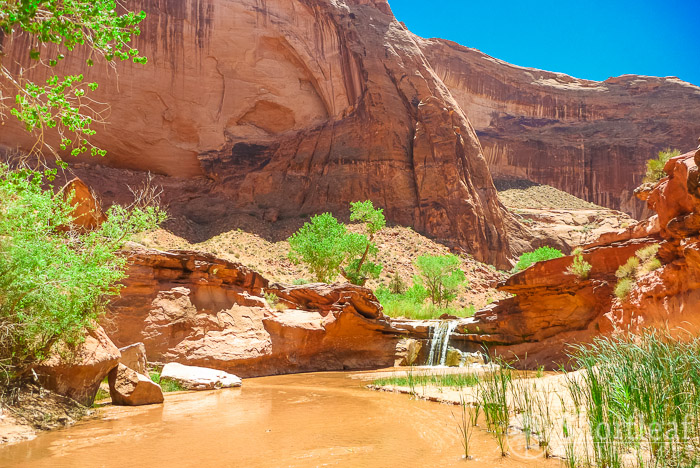 Climbing back up some of the waterfalls was a lot more difficult than jumping down! 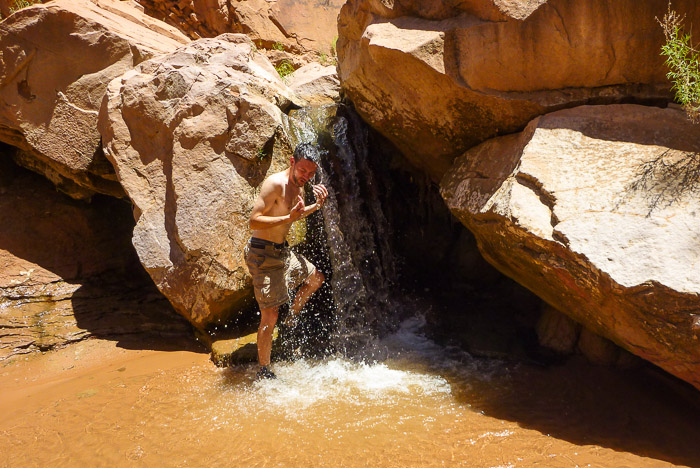 Normally I have a pretty strong aversion to water, but I figured I might not have the opportunity to shower under a waterfall in the desert for a very long time. It was probably the second most refreshing sensation I’ve ever experienced! 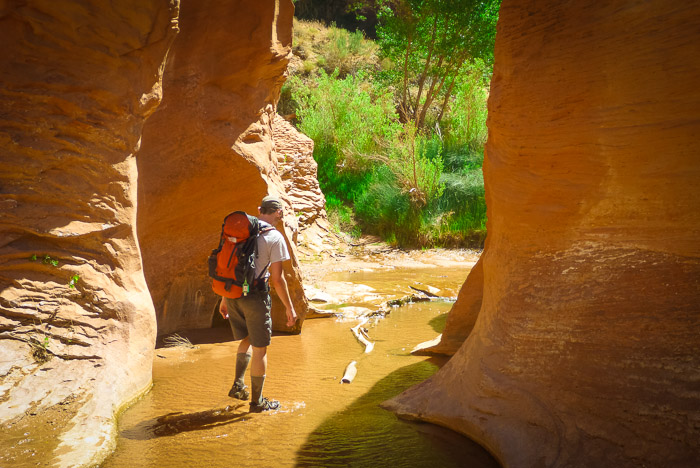 By this time both of us had wet feet so we didn’t have to hike up and around this spot on the way out.

We made it back to our camp where we relaxed, had dinner and watched the bats come out hunting at dusk. Then the next day we got up bright and early to begin the long hike out of the canyon. It was a very long and difficult hike, but well worth the effort!

After we got back to the car we took the scenic way back to the airport… but I will save those photos for another day!

The Moon is Out