My college roommate and I have a kind of ‘tradition’ where we climb a mountain or do some kind of wilderness activity, generally every other year or so.  Even after we’ve both married and had families, our wives have continued to be supportive of our occasional adventures so we’ve managed to keep it going. Usually we’ll fly to another part of the country, though sometimes we opt to enjoy some of the scenic wilderness here in Missouri. This time we decided on Wyoming, a state with the distinction of being America’s least populated state.

The mountain we selected was a remote peak in Wyoming’s Wind River Range. It was a 35 mile round trip hike to the summit. The plan was to hike about 12 miles and setup “base camp”, then climb to the summit on the second day and return to camp.  Then we would hike back out on the third day. We were hiking and sleeping in grizzly country, so we had to take some extra precautions, like storing our food in “bear cans”, carrying bear spray, and I also carried a gun for good measure. 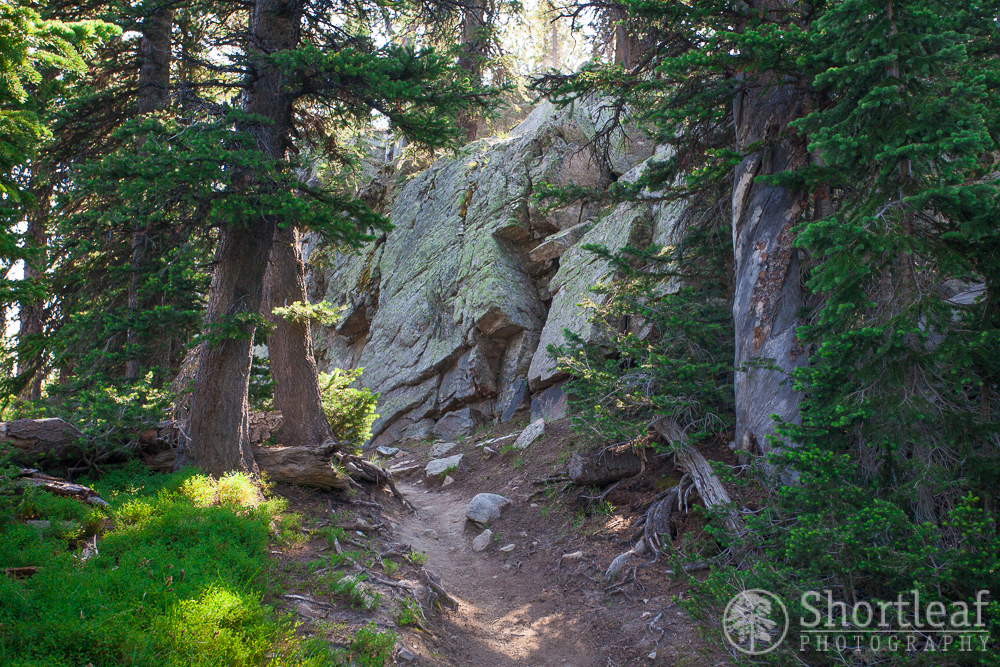 The trail started out as a gentle climb through a forest of mostly spruce and lodgepole pine. Being a tree nerd, I always enjoy the sights and smells of hiking in a coniferous forest and seeing species of trees that aren’t particularly common here in Missouri, especially the Whitebark Pine, a species I had never seen before. I recognized it as soon as I saw one – basically it looks somewhat like our Eastern White Pine, but with white bark similar to a Paper Birch.  As the trail climbed, we started encountering lots of very large boulders and slabs of rock, only a hint of the rocky terrain that was still to come.

The first few miles seemed to go by quickly, and then we arrived at this overlook. It provided our first good view of the area in which we were ultimately headed.  It looked SO FAR AWAY, and the terrain was a maze of ups and downs that was not going to be easy. Our eventual goal, the summit of the broad dome shaped mountain towards the right side of the photo was still about 13 miles away. 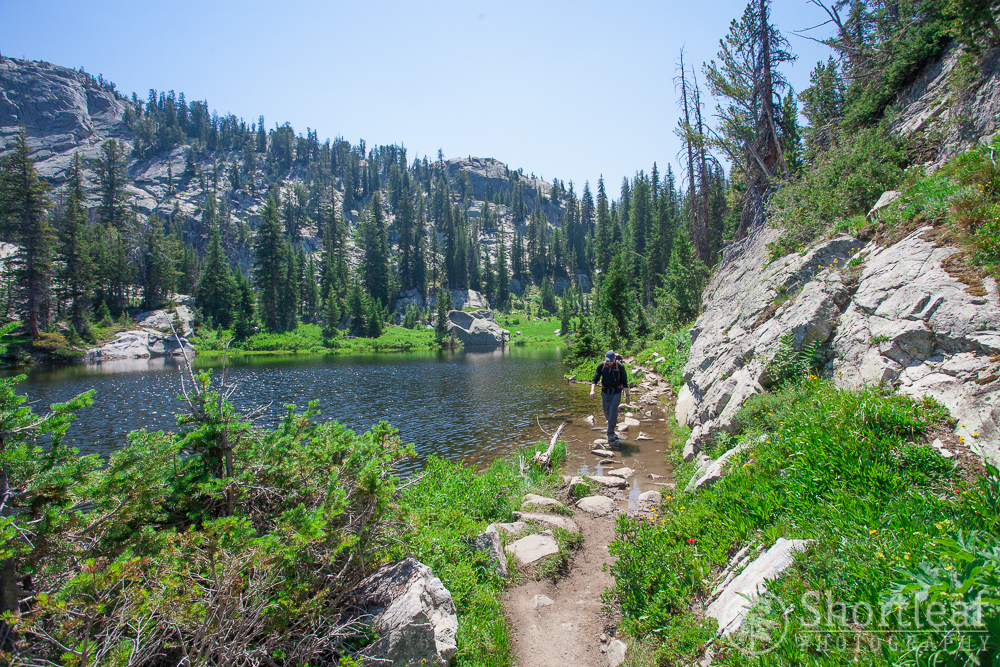 We stopped for a short lunch break, then carried on.  About 6 miles in, we started passing ponds and lakes.  Some of them reminded me of the ponds at Acadia National Park, while others were more similar to those found in Rocky Mountain. The trail was not a typical mountain approach that basically climbs the whole way.  We climbed up, then down, then back up. It was exhausting! 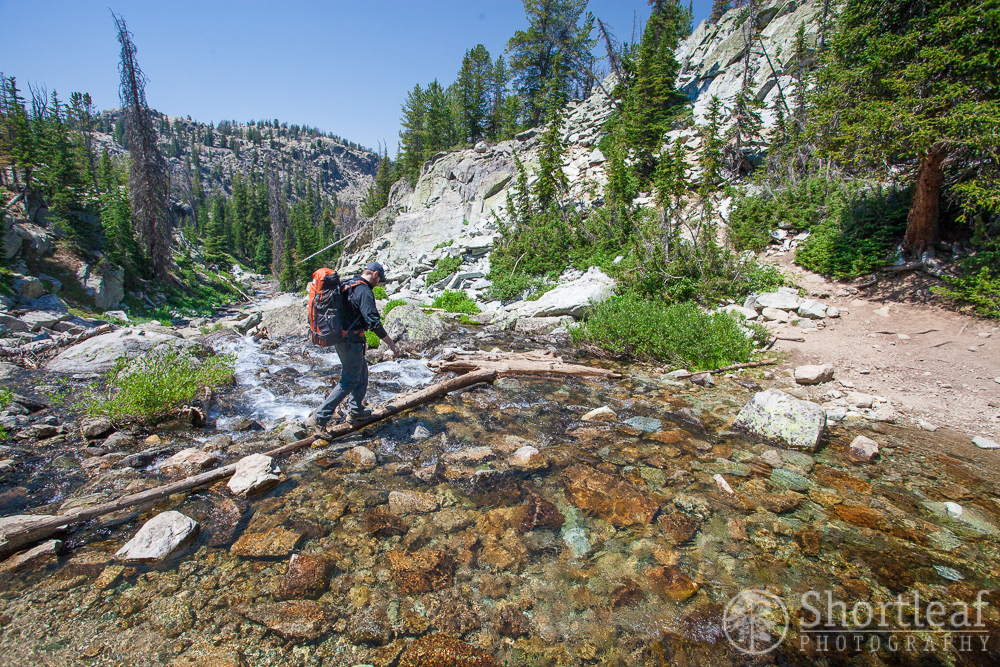 We crossed this mountain stream by walking across a wobbly log.  This, along with about a million other points along the trail would have been a nice place to stop and hang out, throw rocks in the water, listen and watch he cascades above and below, but we had so much distance still to go! 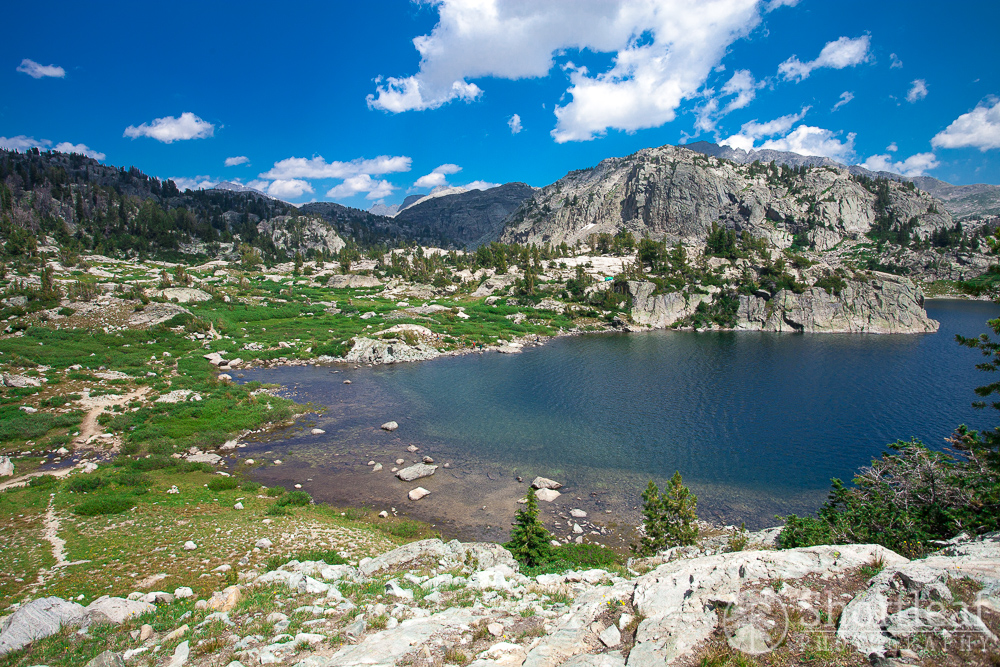 We reached this lake, the largest of the many lakes we would pass, and started feeling like we were getting close to our stopping point for the day. Our feet were starting to blister and our steps were getting slower. The scenery was indeed spectacular and the hike up to this point would have been an amazing hike in it’s own right, but we quickly passed by these lakes. 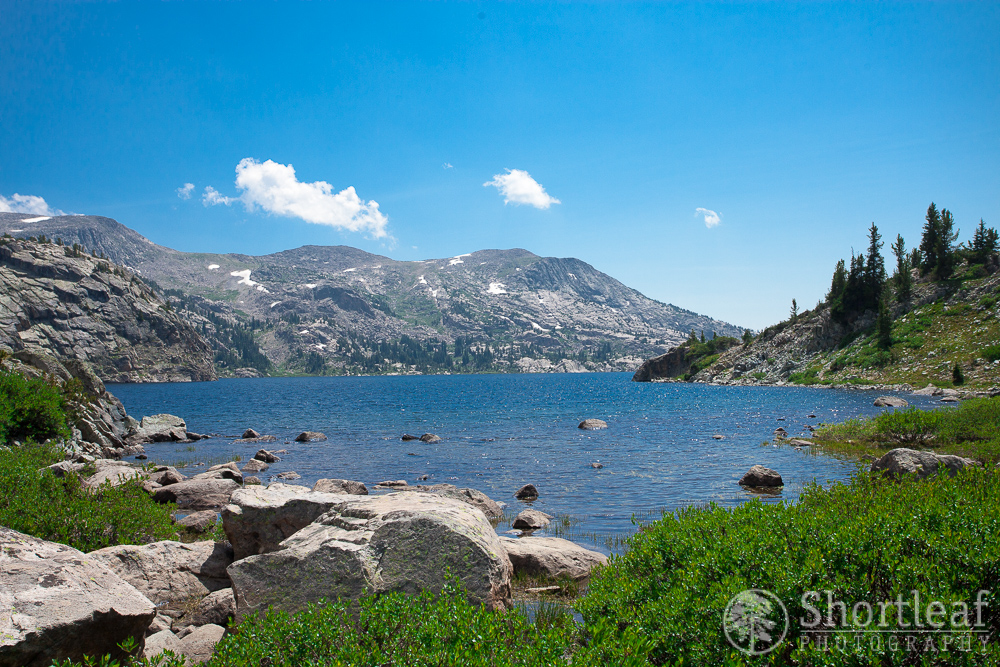 The same lake.  It was much larger than it looked on the map!  As much as I really wanted to take off my extremely heavy backpack and nap on these rocks by the sparkling lake, we had to keep going.  I knew the place we would be staying would be equally beautiful and the sooner we got there, the longer I could completely relax and enjoy the remainder of the afternoon. We only had to climb over one more pass, after which we would descend into the basin containing the lake where we planned to camp. 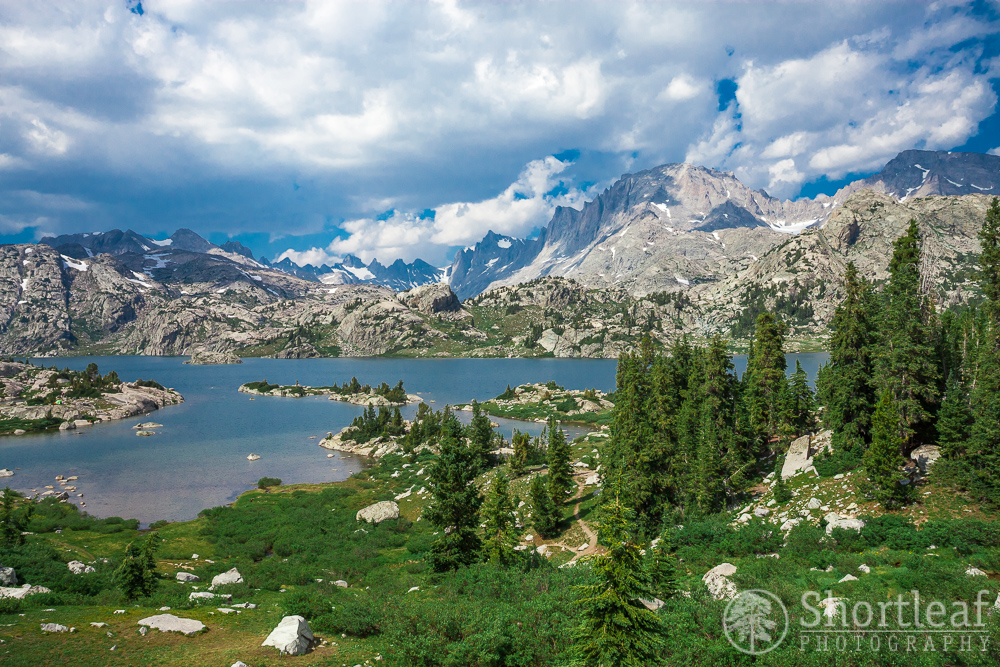 After 8 hours of hiking, we climbed up and over a snow covered pass and were greeted to this sight. At last, the lake where we planned to camp lay before us with a stunning backdrop of the jagged peaks along the continental divide.  “I have finally done it”, I thought to myself. “I’ve found the most beautiful place on Earth.”.  It was a sight unlike anything I had ever seen before. There were simply no words that seemed powerful enough to describe this place. 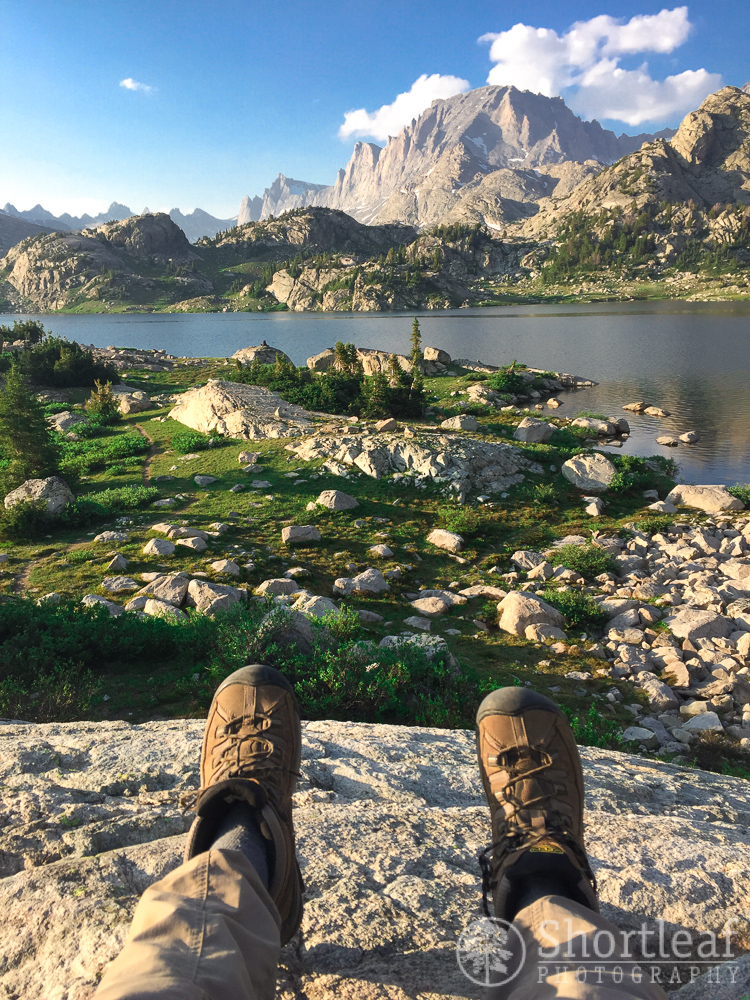 We setup camp near a large flat slab of granite with an incredible view of the lake and in the shadow of the mountain we planned to climb the next day. The lake’s elevation was around 10,300′ so we hoped this would help us acclimate to the thin air before climbing even higher the next day.

We kept looking at this massive mountain, wondering how we would ever make it to the top.  It looked impossibly steep, even though I had read that it was rated a non-technical class 3+, which is in line with some other mountains we have climbed. 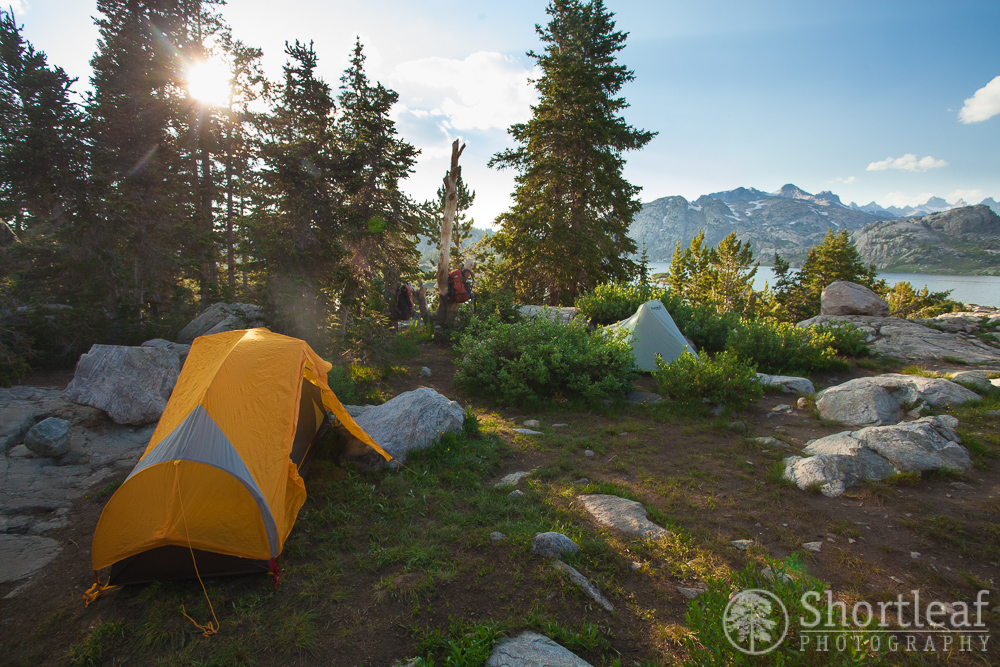 There was in fact one thing about this place that was not so great – the mosquitoes. I have never seen a place so infested with mosquitoes. In the right light, the thick clouds of these biting insects were easily visible. Fortunately we brought bug spray, though it seemed to be of little consequence. I mostly coped by keeping everything covered except my face.

As the sun went down on our campsite, we climbed into our tents and went to sleep, partly because we were tired, but mostly to escape the mosquitoes. I laid there for awhile, looking at the mountain, wondering what we might be getting ourselves into the following day.  We had already come a very long way, but the hardest part of our route was still ahead of us… 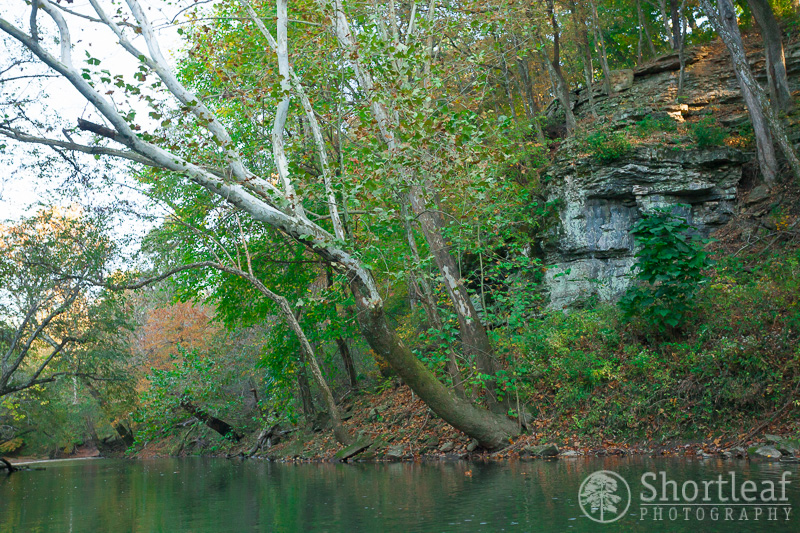