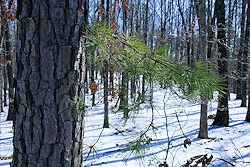 Saturday was an unusual day… snow on the ground, but temps in the 60s. I thought it would be a good opportunity to do some hiking, so Matt and I took a quick trip down to the Mark Twain National Forest near Cassville. We were planning to hike to a really cool natural bridge rock formation we went to a couple years ago… but with my gps batteries dead and the fact that there are no signs marking the way to the natural bridged we mainly ended up wandering around the forest and eventually coming out on the highway a few miles in the opposite direction we intended to go. It was fun anyways. 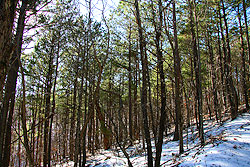 I like the Mark Twain Natl Forest for several reasons. You generally don’t see many, if any other people because nothing is really marked or promoted…it’s basically just land and it’s up to you to find your way to the cool features that exist out there. Another reason I like it is that it’s full of groves of shortleaf pine. Since most of the trees in Missouri are hardwoods, the pines provide some nice greenery in the winter when everything else is brown and grey. I like hiking among the pines because it reminds me of the mountains, both in appearance, smell, and the sound the wind makes blowing through the needles.

And I guess since we never actually found the natural bridge, it just gives us an excuse to go back sometime.