Photo of the Week#11: Virgin Bluff 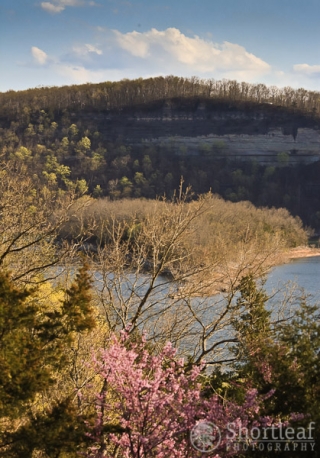 Virgin Bluff is a large rock face approximately 300′ tall and 1000′ long above what used to be the James River prior to being turned into Table Rock Lake. Legend has it that an indian girl leapt to her death when her father refused to allow her to marry a european explorer that had befriended her tribe who inhabited the area at the time.

I’ve tried for years to get an interesting shot of Virgin Bluff and this is probably the closes I’ve come. It’s a magnificent subject but difficult to photograph. Perhaps the main reason is that it’s just so large and flat…awesome in person, boring in an image. Another reason is that it’s surrounded by water and mixing up the vantage point is difficult. The last reason is that it’s hard to get a shot that evokes a sense of nature and wilderness because there are 2 homes and a cell phone tower on top of the bluff, as well as a subdivision taking shape on the hill just off the left frame. Somehow I managed to exclude all of that from the frame.

The afternoon shadows and early spring colors add a bit of extra interest to the photo. I don’t think it’s a gallery worthy image, but I think it’s worthy of my photo of the week!